Description: Single-player mini-mod for Duke3D Atomic. It has a bunch of Terminator stuff including a new vision mode, some new weapons, a new enemy and three new levels (one of them is actually 'Computer Mega Core').

The levels have to be accessed via cheat codes. To start the first one type 'dnscotty210' - to start the second one type 'dnscotty211' (two secret levels of the second episode). Other Duke3D levels are also playable with this mod. The first level is a remake of some 'Strife' level (crappy game by the way) - it's one huge maze with very little ammo, weapons & health. It's very challenging but not unbeatable. The second new level is based on Terminator 2 - it's the bar from the beginning. While the first level is pretty lame and frustrating the second one has a damn good design with tons of good looking vehicles (even motorcycles) and a good gameplay. As for 'Computer Mega Core' read its review.

The new weapons are pretty good although only Shrinker has been modified so that it no longer is the same weapon (shoots grenades now). The others just have new art or are a bit more powerful than they used to be. There's one new enemy and it's actually just the good old Emperor with its original sounds - the rockets just have been replaced with laser sparks and the guy looks different. The new vision mode is pretty cool (text, scripts etc. appear on the screen at times) - although the 'reddish screen' might be a bit annoying at first. I liked the way the screen starts malfunctioning when you're low on energy.

Conclusion: A bunch of well coded new Terminator stuff, one lame level, one good level & one pretty good level. Give it a try. 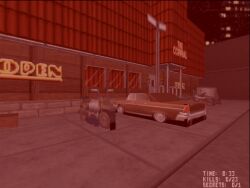 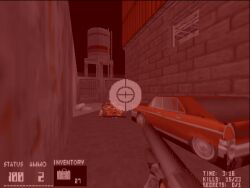