Design: Not much to say - it's fairly good and similar to "Duke Burger". There was one thing I didn't like - that sloped pile of boxes. It just didn't feel realistic. I liked the streets and the police station. Didn't notice anything particular about lighting so I guess the author got it right. The restaurant is a bit cramped at first but things gets better once you get out of the restaurant.

Textures: Nothing you haven't seen before. Trimwork is fine for the most part but could stand out a bit better - now it's just too much like Duke Burger - not that it's bad - it just isn't more than that.

Gameplay: The only problem I had was the lack of a proper climax or an increase in monster numbers near the end. There's a small increase (along with more bullets, which is fair) but it's just your normal Pig Cops & Enforcers. The level had one tank, a few Commanders and some Protector Drones. I'd have wanted to see a Battlelord or two near the end. Puzzles are pretty obvious. Not bad at all - you'll be having fun with this one. It's just not particularly rewarding.

Conclusion: Fun, standard and good looking. City-fans grab this one! 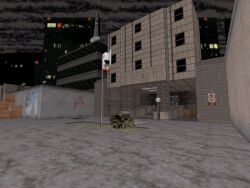 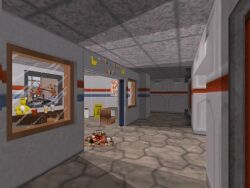