The Review: In this prequel/sequel to Dark Seed, Duke must destroy a station infested with Protector Drones. The map consists of three stages, with the first stage consisting of you exploring the space station, the second of evading a dozen or so drones, and the last of escaping the station and killing as many drones as you can on your way out. Not a lot of ammo is given, so you must make do with what you've got and gradually find the best ways to deal with the drones chasing you. The readme recommends that you rely on the Holoduke to distract the drones, but I remain as unimpressed by the Holoduke as ever. You can pick up steroids as well; the purpose of these isn't so much to outrun the drones as it is to counter the effectiveness of their shrinker blasts. Vents are also useful for making your way around the enemy, and doors are a real lifesaver, especially when you manage to trap several drones behind one (you can also try to kill drones with them, but that's a bit tricky unless you manage to isolate them first).
The gameplay involves some trial and error; how well you're doing seems to heavily depend on which routes you explore first, a fact I noticed on my second playthrough. For example, you can easily avoid the trigger that wakes up most of the drones in the second stage, allowing you to explore the station without anyone chasing you (and even without these there are still some well-staged battles ahead). I don't know if the author intended this, but at least it made the second playthrough feel like a different experience. I also discovered a pair of boots that I had missed on my first playthrough, as they were locked behind a door that's almost impossible to get through if you've got a dozen drones chasing you at that point; not having found the boots on my first playthrough made a particular hurtfloor section involving laser tripmines and turrets feel particularly annoying. I also had no idea what the red key card unlocked until I went out of my way to find it out on my second playthrough.
Design is good throughout with good use of atmospheric lighting (something you might expect to find from an Alien-themed mod), some solid Sanek-style spritework and good use of textures that gives the station a bit of a gloomy atmosphere (maybe even too gloomy; I wouldn't have minded seeing some cycler effects spice up the place a bit).

Conclusion: Dark Station is a well-designed map with a bold gameplay "gimmick". Due to its nature, this is one of those maps that probably play very differently depending on the player and the playthrough. As such, your experience will vary, as some playthroughs will be more prone to trial and error type of gameplay than others, but overall Dark Station is a memorable map (for better or worse) that's worth playing twice. 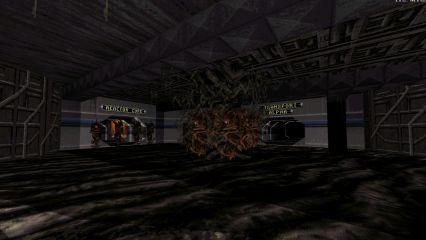 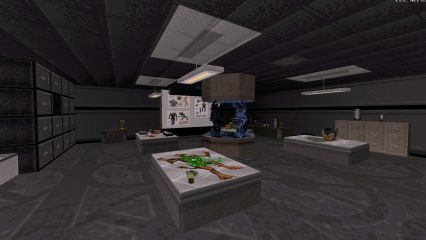