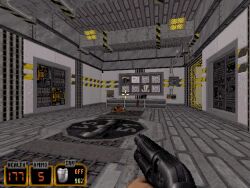 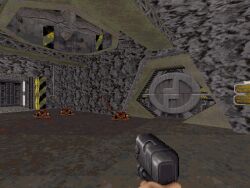 Normally MSDN doesn't host/review episodes but this time I decided to review/release this pack so everyone of you could enjoy its beauty. 'Daikarin' is an episode which has seven levels (one secret level & one boss level). Design is awesome. I can't believe that author completed this thing already three years ago. Design was way before its time. So this pack never got released back then so here it is now. Lets go level by level.

E2L1: City level with some office building & hotel. Lots of explosions & enemies. Neat & bugfree design. Lots of details. Very fun.
E2L2: Starts from a building roof but you'll continue your way to a secret government area - Area 51. This level uses well some new textures (which are modified from original textures). Design is fantastic. There are lots of nice design styles, spritework, texture usage etc.
E2L3: A medieval castle. I have never been a fan of medieval stuff. This level has excellent design & puzzles. It's also quite short compared to first two levels.
E2L4: Another medieval castle. Nice outdoor areas with beautiful mountains. Even smaller than the previous one.
E2L5: Some space-station on moon. Beautiful & simple design with lots of green & brown textures. Reminds me of those rotten labs in original Doom.
E2L6: A boss level with that huge pyramid spaceship from 'Stargate'. Fight with Overlord isn't that special. You'll probably end up shooting eggs instead of the real target.
Secret: Looks familiar. Too familiar. We have seen it soooo many times before. Even in Duke3D.

So what you'll get by downloading this is six high-quality levels, one secret level, some new textures (only used in two levels) & lots of eyecandy. Get it now. 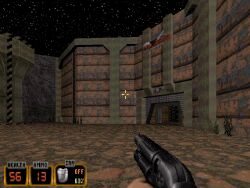 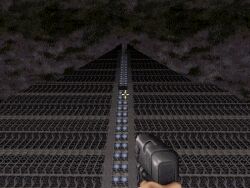 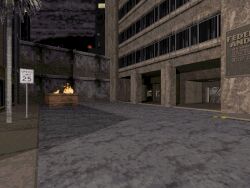