The Review: Community Build Projects come in various sizes and shapes, providing mappers with an opportunity to experiment beyond their usual comfort zones. The 9th (or something like that) CBP is all about being a mini-episode crammed into a single map. A work of five authors, each "section" in the CBP has its own distinct theme; these sections could easily work as individual short-to-medium-size maps in an episode.

Duke64Nukem sets the battleground with a hub section that houses four portals: these are the ones you use to travel to the project's different sections. The hub section makes good use of opening itself up inch by inch, both before and after the portal room. With its brick textures, portals and fires, the section has a Quake vibe to it, but there were a few areas where lighting felt a bit neglected. Combat here is among the map's most balanced, as there's good variety in its monster selection, enough space to fight (and not too much vertical fighting) and it never goes overboard. I did get lost here at one point and started to grow frustrated, but eventually realized I got lost due to my own oversight.
MRCK's section is remarkable for the fact that this is an extremely rare venture beyond MRCK's traditional urban enclave. The section, taking place on an alien planet, is lush with exotic and colorful vegetation. The entire visible spectrum is on display here, but it all serves the section well and nothing manages to feel out of place. Gameplay starts off well as you make your way down a narrow mountain path, but combat turns into a bit of a chore as the monster spam gets pretty intense midway through the section and turns into trench warfare where you advance an inch per minute on your way back to the portal. This kind of length-padding leaves a bad taste in one's mouth, so by the end of it you're just glad it's over.
If MRCK's section was colorful and vibrant, JMW's is the very opposite with its conservative use of colors, textures and low night-time visibility. There's some realistic terrain here that combines nicely with the section's artificial structures such as pillars and some Q2-type base design. The downside is that the section looks and plays like an extension of the author's Devil's Gate.
StarCraftZerg's section takes place on a space station. It's not a very long section, consisting of a single hallway and a few adjacent rooms, but it's the best designed of the bunch with extensive use of spritework, slopes, intricate detailing and innovative texturing. Space maps often carry that "seen it a billion times already" feel, but this one boasts so much creative use of the game's assets that I wouldn't have minded seeing a lot more of it; I just wish the gameplay gimmick were something a bit more innovative than a hunt for buttons.
St1ll_Wanted contributes two sections. The first is an experimentation in weirdness, as if you've stumbled in the middle of Wonderland. Every area has its own visual gimmick that maintains your interest (despite some annoying platforming at the start of the map), and while there's nothing terribly new here, this is a refreshing section where you enter every new area with curiosity. St1llwanted's second section is the post-hub finale. Here you must climb a mountain to make your way to the boss fight. While platforming is nowhere near as annoying here as it could have been, vertical combat against troopers definitely is due to the engine's limited vertical-look perspective. Luckily the section ends with a boss fight where clearly more thought has been put into the combat arena's surroundings than what you'd usually expect from a Duke3D boss arena battle.
Mike Norvak supplied a new music track for the map; while nothing terribly memorable, it's an enjoyable background track that miraculously seems to fit every section.

Conclusion: Like always with Community Build Projects, each section in CBP9 has its strengths and weaknesses. Strengths include variety, creativity and consistently good design, while there were some recognizable general weaknesses such as too much of platforming and y-axis combat. As for the map's gimmick, that of cramming thematically separate mini-maps into a single large map, often there's a good reason to rely on the episodic format, as playing CBP9 can make you feel like you're running a marathon (the map is about an hour long with more than 600 enemies), but for this project I applaud this choice for the sake of variety; in many ways this is the kind of a never-ending map you dreamed of back in the day when such were beyond the capabilities of the engine. 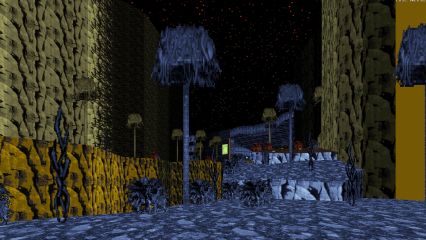 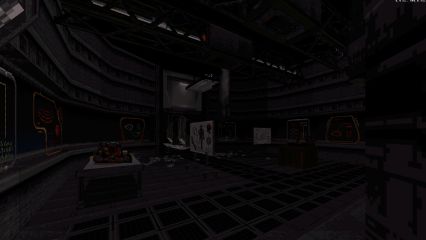