Description: The author of Parkade and RCPD Finale is back with a map that, like Parkade, shows how effective the new TROR (room-over-room) feature is in the right hands, albeit it comes with a heavy cost. Brooklyn Bridge is a pretty big, nonlinear city map that takes place around, well, you're gonna have to guess this one.

Design: The first thing an ATI user is bound to notice is that the map boasts a terrible framerate whenever you're close or facing the bridge section. The map doesn't even utilize Polymer lighting but there are still sources of such lighting such as light emitted by switches, Atomic Healths and some projectiles. Turning these off (type "r_pr_lighting 0" in console) does alleviate the problem a little bit but you still find yourself shutting windows and shooting mirrors in order to remove visual paths to potential framerate sinks. This is a pity as the map itself looks very good and has a distinct look to it. Some of the backalley building exteriors have refreshingly unique features, not least thanks to the TROR feature, and in general the map is a lot gloomier than most city maps. Most of all, the TROR feature has been used with great skill (it's not an easy feature to use). There are locations where you can be looking at several TROR layers at once. All this fits perfectly with the map's nonlinear layout and high degree of interconnectedness. My only complaints (beside the framerate issue) are the rather amateurish 2d skylines and indoor lighting that sometimes seems lacking.

Gameplay: While nonlinear, the map doesn't quite have Parkade's openness and so you're bound to get lost less frequently. Out of the 27 minutes it took to finish the map I spent maybe three or four wandering around not knowing what to do, which is an accomplishment considering the map's size. The map isn't very generous with health or ammo, so I often found myself running around with less than 20 health points. Unfortunately this wasn't all due to item/monster ratio but also due to the horrible framerate which, from time to time, cost me quite a bit of health and bullets. Autoaim is pretty much a must if you're in a similar situation.

Conclusion: With Brooklyn Bridge Paul has once again demonstrated the power of the TROR feature that should feel right at home in this heavily interconnected map. At its best the map plays out like a jigsaw puzzle with you opening up new routes that connect fresh parts to the old. Unfortunately the Polymer requirement takes a heavy toll on performance, putting downward pressure on the map's fun factor. 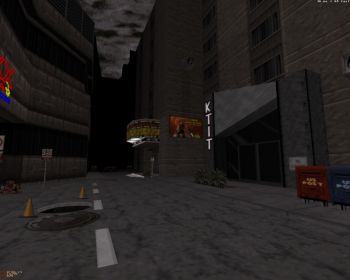 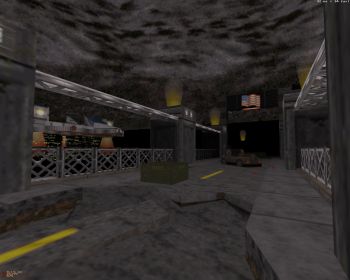