The Review:The name "asbestos" immediately rang a bell and sure enough, it's the author of Police, a map from 1998 that pops in my head every now and then screaming "why am I still not available on MSDN?". Bacon Grease started off as a map for Final Sundown, a never-finished Total Conversion I remember only by its name. But despite its origin, the map couldn't be more vanilla. It is interconnected, almost every door leads somewhere (and mere decorative doors are implicitly marked as such) and there's no fancy, blasphemous stuff going on with textures and sprites. Design is still very good with emphasis on strong lighting and 3DR type city design that's been conservatively improved for a 2022 audience. Unlike the original maps, Bacon Grease doesn't focus on a single theme but is more like a tour of various familiar locations; a bank, a subway, a sewer and so on. There are also fires, destroyed apartments, flipped squad cars (think of Freeway) and other signs of destruction to give the impression of an invasion (or maybe a BLM "demonstration", who knows).
Gameplay is all vanilla too, revolving around finding keys rather than solving elaborate puzzles. This is one of those where you might come across several key slots before finding the first key, potentially leaving you with a "what now?" moment for a few seconds, but there's nothing inherently confusing about the layout - just keep your eyes on the street as well. The map also never succumbs to the lazy tactic of throwing a large number of aliens at you, and yet I still found it somewhat challenging thanks to its clever placement of enemies and weapons. (At the same time, there were some annoying instances of hitscanners hitting you from a distance partially concealed by the black shroud.) A slight design-related snag that was present in Police all the same is that some swing doors have a nasty habit of getting in your way, which is something that almost never happened in the original maps. The map is quite lengthy at 20 minutes; just as you get the impression that you're almost at the end, a whole new section opens up and you get to keep playing.
As a final note, it might not be a bad idea to play Police (download link above) either before or after Bacon Grease, as this one is clearly a logical step (or, rather, a leap) from that in terms of design and scope. 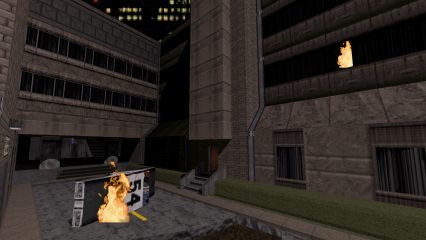 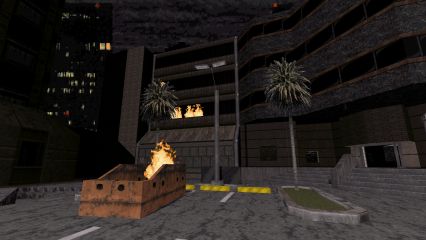