ALIENS TC DEMO BY RUSTY NAILS Requires Atomic Edition & EDuke. You can get EDuke from 3drealms.com.

There is a huge amount of Alien film themed TCs & usermaps (some completed, some abandoned) out there. I'm a big fan of Alien movies - that's why I expect a lot from every Alien themed project. Rusty Nails' Aliens TC demo is a two-level demo with two new guns & an alien enemy.

First level has no enemies. It brings excitement with its dead hallways, ambient sounds & alien hives. Second level introduces you to alien enemy and to some facehugger eggs. Both levels are well designed, textures, shadowed and they play well. There are no hard puzzles and design serves the theme well (some areas do lack details however). Spritework is good and alien theme is well used. Hive in the first level might be a bit too dark (and texture is a bit lame) but that's how it should be. With some aliens it could be exciting.

There are two new guns. No new effects but new good looking models and good sound effects. Pulse Rifle doesn't look like a Pulse Rifle but it looks good and sounds good. The smoke effect which comes when you hit someone is a bit too big perhaps. Alien enemy art is a bit messy and dark but doesn't really matter because they sound very good, die easily, attack in packs and cause a lot of damage. They're exactly like Aliens. However acid spit is replaced - for now - with a shrinker blast which is a bit lame and doesn't really fit with the theme. Rest of the sound effects in this pack are well done and from the movie (typical wind & door sounds). Pain sound is a bit annoying.

A well made two-level demo with some very good stuff. It's a bit short but this is just a demo. Can't wait to get my hands on the final product - if it ever gets out. TCs these days have a habit of dying before they get out. As we wait we can have fun by watching our favorite Alien films from Aliens DVD Box-set 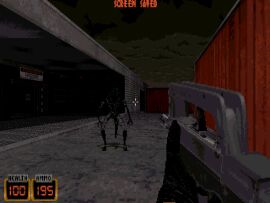 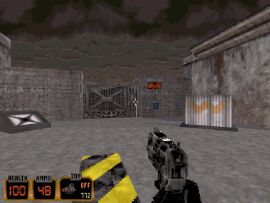