Note: It should be noted that I was involved in beta testing WGRealms 2: Siege Breaker. Therefore it's a bit hard to approach the final product from a fresh angle. The difference between the first beta and the released version is significant which is not only due to some significant changes in gameplay but also due to me getting heavily used to the way the mod is supposed to be played. WGR2: Siege Breaker is standalone: having a copy of Duke3D is not required.

Review: WGR2 originally started as a sequel to WGRealms. William Gee, the author, then changed things a bit by experimenting with high resolution textures in Unreal-like environments. It wasn't until William's spree with Quake maps and teaming up with DeeperThought that WGR2 started approaching its final incarnation. Some excessive Doom elements were quickly abandoned, leaving only the best in the final product. WGRealms 2: Siege Breaker is the first episode of WGRealms 2. As such, it includes four maps (of which one is a short intro), lots of new stuff and a new type of gameplay but one that is not too alien to Duke3D.

William's early fascination with Unreal is apparent (which is really the case with all of his levels). Action takes place almost exclusively outdoors or in large-scale hallways. Terrain design is impressive. Take the third level for instance, where ruins of a once great civilization stand tall against the horizon. Two other sources of inspiration are apparent: Indoor medieval architecture bears some resemblance to several Quake usermaps and several locations caught me thinking of Lord of the Rings. While all maps are medieval and mainly outdoor, each has a distinct look to it, mostly a result of how William has given each map a distinct hue. The first map is green (nature), the first half of the second map is purple (water), the second half red (fire), and the third map is white (snow). The sensation of similar yet distinct fantasy worlds is further enhanced by carefully selected skyboxes and a fitting soundtrack (there were several irritating pieces however). 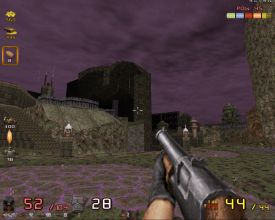 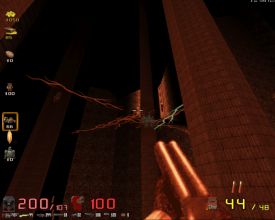 DeeperThought's coding introduces a pile of new stuff, rendering the traditional Duke gameplay very different. At first you may experience difficulties adjusting to the new style of play which is why you should keep an eye on hints, displayable on screen from time to time. Gameplay is a mix of Duke and Doom/Quake, with tons of enemies shooting at you from all directions at any given second. Initially, after seeing some early gameplay videos, I had my doubts about this approach because Doom type of gameplay has never really worked in Duke. (William's own WGSpace episode is a good example of this.) In WGR2, however, it works, thanks to a wide variety of mostly weak enemies, game speed, your weaponry and interesting environments where you're given plenty of room to move. Weapons (all new and with impressive art by Cage) are capable of inflicting mass murder and even the weakest are powerful against most enemy types on top of which you have a rocket launcher with multi-lockable-rocket function and the BFG for clearing entire areas. Only the flamethrower turned out to be a bit useless, mostly because a guy like me who likes to move a lot while fighting tends to get burned by his own fire, and the Plasma Gun, which seemed wasteful to use because from a distance you're likely to miss two thirds of every plasma shot (one shot fires three particles in separate directions). Like in Doom, regular enemies tend to be weak, making action fast-paced. Most of their art comes from games I haven't played and even the ones from Doom didn't feel "ripped". There are several annoyances such as web-shooting spiders and various monsters with status attacks but these problems are pretty minor in the final version. In the end, WGR2 plays like a hybrid of Duke, Doom and Quake: Doom because of your ability to inflict mass murder in a short timespan, Quake because of the overall speed (Doom is tediously slow). 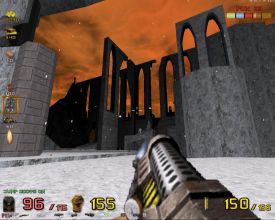 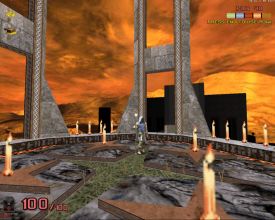 WGR2 is not only about shooting bad guys. There are several new gameplay elements. One is picking up souls, left behind by enemies once you've rid the world of them. These souls are then "sucked" by demonic walls, opening up new routes. Another element is the presence of item chests, openable with gold coins and treasure. While this works most of the time, the distinction between gold and treasure is not not only unclear at times but also a bit useless. Then there's "POW", a potentially powerful attack. POW is accumulated by killing enemies without getting hit too often. The more of it you have, the more powerful your POW attack will be. While having a huge stash of POW can turn any otherwise difficult boss combat into a child's play, you should not count on having a lot of POW when you need it: getting hit a couple of times can really bring your POW down pretty quickly. Luckily the released version seems to be balanced enough so that having too little POW isn't the end of the world. It should be noted that I'm a bit unable to provide an objective opinion on the adequacy of gold/treasure and POW balance because I knew in advance what to expect from the released & reviewed version.

There are also several technical problems. First of all, due to bugs in EDuke32, you may experience freezes frequently. Some have managed to complete the entire mod without any freezes while I had around seven freezes during my latest playthrough. Second, my mouse refused to work with the included version of EDuke32. In case you have the same problem, fetch an older copy of EDuke32 although then you cannot save in the vicinity of portals (the game crashes instantly if you do) and you can't view the ending (unless you update back to the included EDuke32 version and launch the ending via a console command).

Conclusion: This is the kind of a mod you might want to play at least twice to get a hang of how it works. Once you know how to optimize your behavior in any given situation, you have more time in your hands to enjoy and appreciate the mod, especially because the levels are so huge and visually stunning that it'd be a pity to go through them without being able to enjoy them to the fullest. Even on my third/fourth playthrough there were several sources of annoyance, but as a whole Siege Breaker is an excellent mix of top-notch mapping and coding. 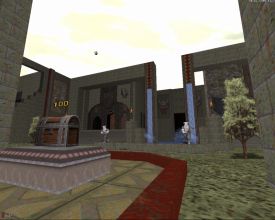 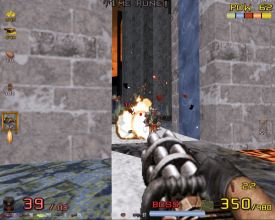