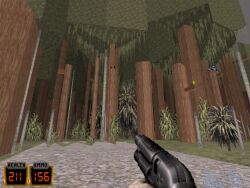 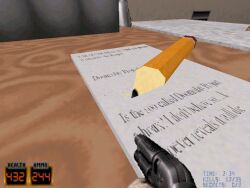 Zaxtor's third episode for the "Oblivion" saga is here. Oblivion Episode 3 is a mix of good, bad and frustrating puzzles, tons of mind-blowing innovations & architecture and well balanced action.

The focus is on illusion and magic. About half of the levels are "weird", filled with floating platforms, disco lights, colorful textures and out-of-this-world puzzles. I have very mixed feelings about the levels. They look good, sometimes fantastic and fascinating, but some of the puzzles are effective gameplay killers. For example; how am I supposed to know there's a button on a bookshelf when absolutely nothing points to it? How fun is it trying to guess a combination for an 8-button lock (answer: not very)? And mazes are never fun - never. The episode has at least two of them; one inside a pyramid in the fourth level and one that has been recycled from a previous episode.
Near the end of the third level you have to face another "Demon Head" monster (familiar from Doom 2 and previous Oblivion episodes). This guy alone is way tougher than the Episode 3 boss. It's an underwater fight and I was forced to cheat since the Scuba Gear ran out of oxygen - no wonder since the only weapons I had were a pistol, a shotgun and some bombs.

The overall level architecture is great. One level reminded me of a classic Counter-Strike map "CS_Mice" (or "Rats") where the player is shrunk and has to get all the way to the top of a living room. It was fun, until I reached the top and realized that I needed a key that was somewhere down below. Another level featured a cool section where time seems to have stopped, with enemies just standing there, frozen in time only to be awakened a moment later.
I loved the fourth level, the "miniature map". It's like a Final Fantasy worldmap where you travel from one location to another on a huge map filled with miniature versions of the locations. Entering a location "scales" them to their original size. The map has plenty of variety and numerous locations from apartment buildings to moving boats, rainforests, gigantic mountains (which remined me a lot of this) and so on.
The second last level, a huge space station, is a bitch. It looks very good and it's huge, filled with numerous interesting locations and brilliant architecture. But it's too huge, has tons of locked doors and buttons around the map. The map took me over an hour of which 70-80% (I'm not kidding) was spent on wandering mindlessly around the map.
The last map is a nice, short run through some caves with a good episode boss, followed by an ending animation. There's one more episode to go so the party is not over yet.

Conclusion: Compared to the two previous parts this one turned out to be the best looking but with the worst gameplay. The visuals are stunning but the gameplay is filled with frustrating puzzles. The solutions are most of the time the kind of that you'd never think of unless you were the guy who built them. Zaxtor seems to rely too heavily on the idea that "if I can find them the rest can find them too" while forgetting that he's the one who built the puzzles. However, some of the levels are fairly easy and short and the visuals never let you down. It's a worthy episode but it's definitely not for puzzle-haters.

Check also the Oblivion section and reviews for episodes 1 and 2. 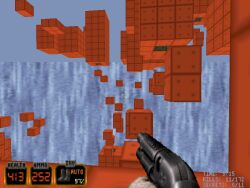 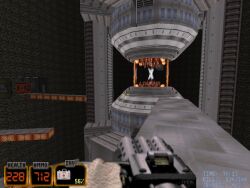