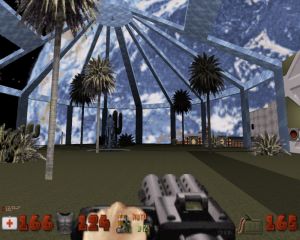 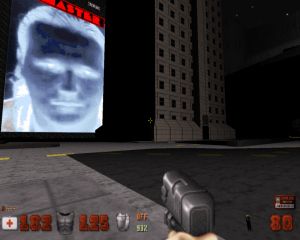 Note: If you can't launch the TC, rename LR&WB.con and LR&WB.grp to lrwb.con and lrwb.grp (i.e., without the "&" sign) and open the batch file in Notepad to modify it to reflect these changes. Also note that duke3d.exe should be eduke32.exe if you're playing in EDuke32. |

Somewhere around the spring of 1999, the mainpage of Dukeworld spotlighted a TC called "Last Reaction & Water Bases". A quick look at some of the screenshots revealed that this TC might actually amount to something, unlike nearly all the other Duke3D TCs which were either mediocre or downright horrible. So, downloading it felt like I was getting a new Duke3D mission pack - for free. (Except for the fact that I actually had to sacrifice some of my weekly internet time to be able to download an 8-megabyte TC: to a poor household internet time was a scarce resource.)

The first episode, Last Reaction, consists of 11 levels, separated into three segments. The first three maps are of the canyon and hi-tech variety. The scale of these levels is huge and there's a bit too much backtracking, particularly in the first map ("Last Reaction"). Ammo is also a bit scarce but there are so many secret places that exploration easily pays off. The second segment consists of three space maps. The first, "Khaki Space", takes place aboard a space station and it's one of the most demanding maps ever, taking easily around 40 minutes. There's a bit too much mindless wandering but the environment is interesting with big rooms and good lighting effects. After this Duke lands on the Moon where he must make his way through an epic industrial site ("Lunar Factory") before finding himself in a Lunar city, the New Los Angeles, one of my favorite maps in this game. It's not just the theme that's fascinating (and inspired me to make my own New LA map) but it's been played out well with tall skyscrapers casting spectacular shadows on the surface of the Moon and the author casting his gaze wherever you go. The last segment consists of four maps that take place on Earth, three of them being city maps. "Old L.A. On Ice" is a rare treat with its plenitude of submerged urban areas.
In general, maps in this first episode do not share a common theme but there's a somewhat logical progression from one map to another. While sometimes lacking in design, factors such as strong lighting, interconnectedness and varied environments easily make up for this lack. The first few maps may be a bit demanding with their occasional scarcity of ammo and huge size but perseverance pays off. 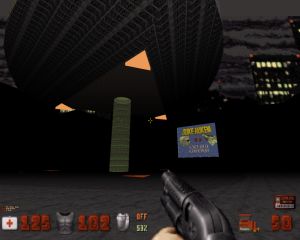 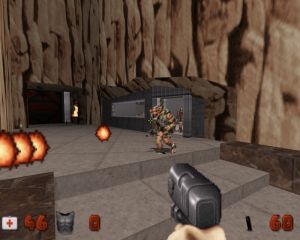 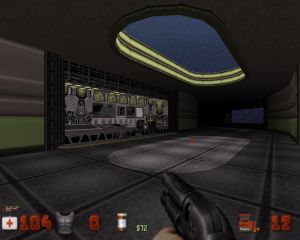 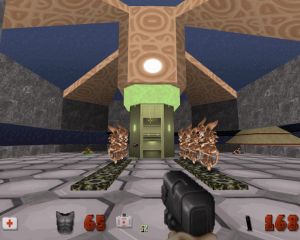 The second episode, Water Bases, is a bit more consistent. Its first seven maps are kinda like an underwater version of Lunar Apocalypse with Duke making his way through the ocean floor filled with hi-tech bases. These maps don't quite reach the epicness of the first episode but surpass that episode in quality and gameplay balance. Like the space maps of Lunar Apocalypse, these too tend to blend in together so well that it's harder to distinguish individual maps, except when the texture scheme is noticeably different ("Ace of Clover"). So, in short, taken as a whole the underwater maps are a bit generic, like E2. Rather than recycling textures from Lunar Apocalypse, the author decided to create a bunch of new ones based on those E2 textures, giving the maps a fresh and professional look. Particularly the episode's rock, liquid and "sky" textures give it a nice sense of thematic distinctness. The rest of the episode consist of desolate facilities and ruined cities infested with mostly Sentry and Protector Drones, further contributing to the sense of desolation. These remaining maps have an intriguing time-travel angle and the whole thing is wrapped up with a harder-than-usual (but fair) boss fight against a new type of Drone in an effort to change the course of (future) history.

Everything in this TC is polished and made to look consistent. While other TCs tend to be filled with textures that stand out either due to their poor quality or the simple fact that they're in the wrong game, LR&WB was designed with consistency. There are no new weapons, which is something I welcomed with much applause back in the days, considering the horrible quality of most custom-made (or ripped) weapons back then. New enemies (mostly based on the originals but there are some new ones as well) and textures are top-notch, maybe the best I've seen in Duke with the sole exception of Starship Troopers. In this sense, this is not really a Total Conversion as such but rather a Duke3D expansion, kinda like what the Plutonium Pak was to the original three-episode Duke3D. This impression is further enhanced by the author's reliance on very strong 3DR-type lighting and Sector Effector/Cycler effects that combined result in two dozen dynamic environments. And as if that wasn't enough, there are new ending animations for both episodes.

Conclusion: The whole TC feels like a long journey, and it certainly is, taking easily around 6-8 hours to finish. There are moments when there's too much backtracking, visibility is too low and you're running low on ammo, but those moments of frustration are fleeting. Last Reaction & Water Bases is one of the few TCs where every map is at least "good", and almost the only TC where every piece of asset from custom enemies to textures is of high quality. Last Reaction & Water Bases, while not quite the best TC out there, is without a doubt my favorite and responsible for restoring my faith in custom-made content. (Btw, this is the third MSDN review of Last Reaction. Previous review from 2000 is still here but it's pretty bad.) 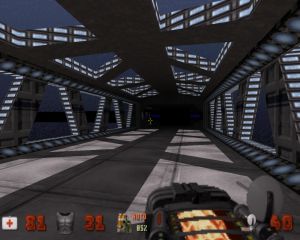 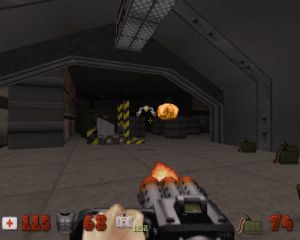