Description: David B. returned to Duke3D mapping some weeks ago with his school-themed Highland. Instead of retreating back to his cave, David B. found an old map of his, dusted it and released it. Hamilton Pool is a small city map - with a pool.

Into It: According to the txt the map has gone through several iterations throughout the years. In fact, work on the map began all the way back in 1999, the very year this site came to being. Despite such a long development process, the map has a consistent up-to-date look while still being a bit of a traditional city map. The main floor of the swimming hall provides the usual locations from locker rooms to a nudie bar, like you'd expect from any family-friendly swimming establishment. The floor's layout is open-ended, allowing you to go about your things in almost any order, increasing the map's replay factor. It's also more generous with enemies than Highland was despite being several minutes shorter.

Conclusion: Hamilton Pool doesn't break any new ground but it's a well-designed city map with shades of both tradition and modernity. While short, its nonlinear approach to layout and well-balanced gameplay offer some replay value. 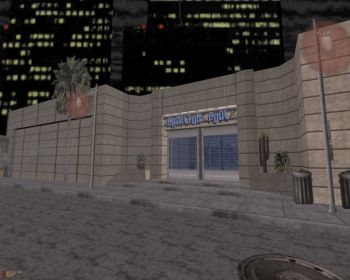 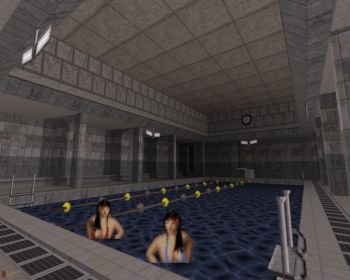