Review: City maps that seem influenced by Blum & Levelord's maps have been somewhat rare in the past few years. Rouaud-Oostrum type of maps (imitated by mappers such as MRCK & Taivo Maripuu) have been more popular so getting your hands on a map such as Skycity (another good example is Extermination, a map very similar to Skycity) is like you're being treated the original Duke3D for the second time.

Skycity is well designed. Lighting is excellent (although missing in a few locations, such as in the airplane), architecture is clean, polished and well textured. The map relies heavily on Y-axis action, giving it a more realistic city look compared to, for example, my own city maps. This also makes the use of strong, sloped shadows effective. There are plenty of good looking vehicles, especially the airplane which stands out as one of the finest constructs ever in a Duke3D level. Room-over-room effects have been put into good use. All those headlights on cars, however, didn't look that good. They just seemed to stand out from the environment a bit too clearly.

Gameplay has its ups and downs. Ammo/enemy ratio is good although I wouldn't have minded seeing some more monsters and maybe a Battlelord or two (you get to face some Tanks, however). As mentiond above, there's plenty of Y-axis action, jumping from building to building and from window to window. The streets seemed a bit quiet and static with all the non-moving vehicles. There is a bunch of secrets to be found.

Conclusion: As mentioned some months ago, a 3DRealms influenced city map cannot go wrong. It's like your favorite E3 map times two. I'd have liked to hear a few more ambient sounds though. 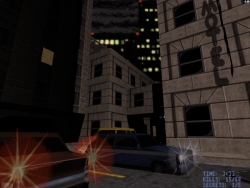 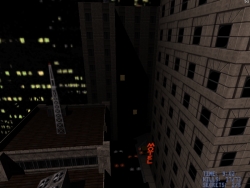