The review: Siebenpolis borrows its visual theme from Seven ("Sieben"), an old Dukematch map by Taivo Maripuu where everything was colored in palette 7, which is that ugly green/brown color scheme. I never particularly cared for this look in that DM map and I didn't find it any more appealing in this map either. It just washes out all the colors, makes the map look a bit dull and makes it hard to spot enemies against their backgrounds. The idea is not bad but as far as my taste is concerned, it just doesn't work here. (Come to think of it, a monochrome map with a few special colors reserved for interactive elements and enemies ŕ la Betrayer would be badass if done right.) Gameplay is nonlinear and very vertically oriented; you're given basically an unlimited supply of jetpacks with which to navigate the high reaches of the map. Your task consists of locating and pushing eight switches that, when combined, lower the last barrier. Now, as you might know, this isn't exactly the first map to do this so you should get the "been there, done that" feeling quite often while playing. The emphasized vertical dimension is again a nice idea but doesn't work so well in practice thanks to the numerous respawning hitscan enemies that fill the open street sections pretty much every time you exit an indoor location. When you combine this with the map's low visibility and somewhat low ammo count, it gets tedious very quickly and you just start flying past the respawns, which in the long run only makes matters worse. (I also got chased by a persistent mini-Protector Drone(s?) at one point, which made me feel like Ash in Army of Darkness and forced me to cheat, but MRCK removed them from the second version.)
MRCK is a talented mapper who's been experimenting a bit with his maps as of late. Considering the game's age, such convention breaking is extremely welcome, but that doesn't mean it's going to work every time. 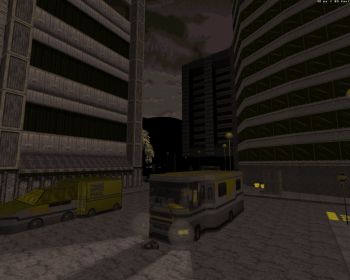 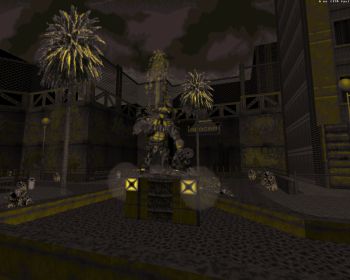