Description: Daniel is known from his well designed and a bit difficult levels. This 'Poseidon' piece is probably his last DN3D level so as you read this you might as well check out that you have played Daniel's previous levels which are: One2ZerO, Near Life Experience, We Store Your Crap and Streets of Gotham City. They're all hot maps with good design, nice ideas & tough puzzles.

Design: Poseidon has a lot more spritework than Daniel's previous levels. It's is bugfree and used quite often. One thing which I didn't like was this one box which was somehow swallowed by a sprite-made floor. There are nice details around the level and some curved surfaces. Stairwells are good - nice sector-over-sector work. Shadows are very impressive. For every shadow there is a reason and for every light there's a source (take a look at that stairwell in the beginning and how the light comes from the water tank).

Textures: Nothing new or impressive. Textures work well enough but they give a bit dull looking atmosphere. Nothing unprofessional about them really.

Gameplay: Daniel's levels have always been a bit tough (especially 'We Store Your Crap'). This one is no exception. There's nothing outstandingly clever or new - those tough puzzles are mostly just button hunting. At times puzzles get a bit frustrating. It took a while to find the button which unlocked the yellow key card room. And it wasn't so easy to jump to the first vent. Monster/weapon balance is good. In the beginning you have to use pistol for a while which I liked (usually shotgun is given way too quickly).

Innovations: Nothing outstanding if you have played Daniel's previous levels.

Conclusion: Well designed and original level with a bit tough puzzles. It's on the same line with Daniel's 'Streets of Gotham City' & 'Near Life Experience'. 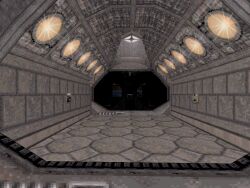 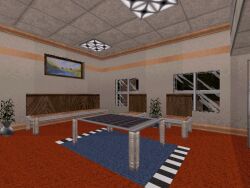