Rarely you find old stuff that's good - luckily Nancsi706 from AMC forums pointed me to right direction and now we have a brand new episode here - straight from the grave!

This product most likely comes from Czech Republic and it features six levels with a bunch of new sounds & a midi (which I had turned off for various reasons). First of all let me congratulate the author for the new weapon sounds which were all fantastic.

The levels just might follow a storyline but since I don't speak a word of Czech I can't say what is it all about. The flow and continuation is perfect - like at the end of the first level you enter a bus and start the second level driving it. It's nothing we haven't seen before but it's still done in a way it should always be done.

Locations vary quite a lot - you start from a warehouse/border-station of some sort and continue to a hotel where you spend some time kicking alien asses. Then it's time to hit the road again and visit a gass station. This is the level where you might be forced to use dnclip during a particular underwater area (if you can't swim back to the surface because of a teleportation bug). There's also a good looking car-chase going around the map as you kick some butt. The fourth map is a standard mountain base and the fifth is a mountain/hi-tech map with huge outdoor areas. This is also the hardest of the pack. The boss map is short but enjoyable.

Design is a bit above average although the fifth level looks a bit too undetailed at times (and Jonof causes some bugs with visibility). The mood is right - most likely because continuation between the levels works. Just remember to 'dnclip' if you get stuck near the end of the third map and explore the train wreck carefully in the fift map.

Conclusion: "Lost Highway" turned out to be a pleasant surprise. Good levels, good gameplay and enough variety to cheer you up (the shotgun & pistol models are from 3D-Models section) 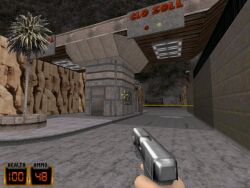 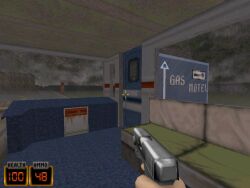 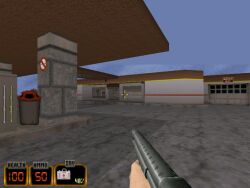 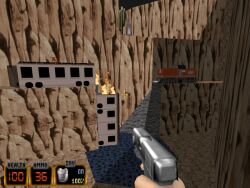