The Review: A while back Sanek decided to give up working on this third "LORCH" map and release it in an unfinished state. That was a terrible decision because the map had potential and was, in a way, almost finished. So, it took a while but Sanek went back to work on it, but rather than going balls deep, he went only halfway in. The map we have here now is a more compact experience with some of the original segments declared off-limits. This was a smart choice and an efficient way to handle maps that have grown too big to handle. However, the sealing off of old parts isn't exactly smooth; there are plenty of invisible walls everywhere often with nothing that'd explain them. At least one of these managed to trap me inside, forcing me to load a save. There are also way too many spots where you're forced to take fall damage, which can kill your progress if you don't have enough health.
Other than that, the map plays pretty well. There's an abundant supply of ammo & health, and some good ambushes to keep you on your toes. (These would be less fair if it weren't for the abundance of health.) The map is pretty easy to navigate now and involves some verticality as well; having spent the past week playing Mirror's Edge Catalyst, all the rooftop hopping seemed pleasantly familiar (if only Duke weren't so sensitive to fall damage). Indoor areas are detailed and outdoor areas pretty lively with detailed vehicles and, in the distance, a set of buildings with illuminated windows which make up for a nice night-time big-city atmosphere (aside from some serious flickering issues in Polymost).

Conclusion: LORCH 3 is finally here and while it both looks and plays good, being a bit different from your usual set of city maps, a lot of the finishing-up work seems very rushed; tellingly, even the txt file still has the description from DoomBOX. Still well worth your playtime! 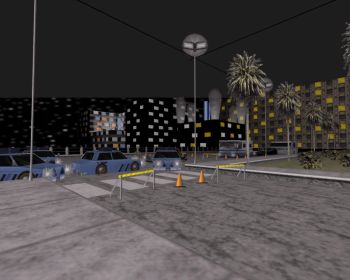 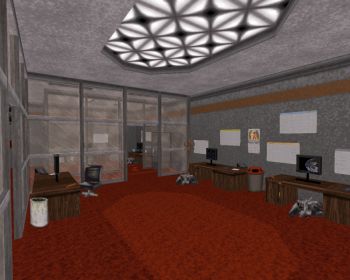