The review: This is another fast-paced map from StarCraftZerg whom you may remember from the space-themed Duke Nukem For3ver Part 2. A metal track by some pussy hair band kicks in as soon as the map starts, setting the tone for the ensuing slaughter. After the balanced, pistol/trooper heavy start, you start facing bigger foes left and right, including a bit too many Pig Cop Tanks (some in close quarters, a faux pas if there ever was one). Zerg provides you with all the tools necessary for the job, but health is never in abundance. Fortunately the map's layout is ample enough for both finding cover and moving around, the way an action-filled map should be. Design-wise the map's urban areas have been seen before, but there's a bit of novelty in the map's approach to its underground base parts, including a rare variation of a multi-button puzzle. Both texturing and spritework have improved noticeably since the author's last map, and there are more Sector Effector effects to boot. Lighting is very good, relying both on steadily intensifying lighting and sharp contrasts, but some areas were much too dark, a problem exacerbated when the map is played during the day (which is a very long one in Finland at this time of year). Duke's Day Off is a map that quickly draws you into the action and never lets go. It's fitting then that it ends with a blast, pitting the player against Commanders, Battlelords and an Emperor on a small rooftop. 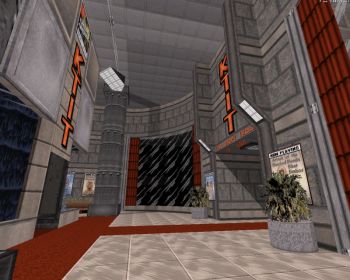 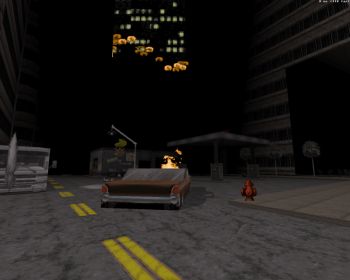