The review: The aliens are causing trouble on the Moon again and Duke is sent to un-trouble them. The map is a pretty short (less than ten minutes) piece of work by StarCraftZerg, who's been publishing a lot of content for Duke3D through the Steam Workshop lately. For3ver Part 2 is generic like the vast majority of space maps of this type but on this day and age even generic space maps are welcome if for no other reason but their relative scarcity. The map's design is not mindblowing but makes fairly good use of details and curved surfaces. Texturing is mostly on the safe side, the kind of you'd expect from a space map, but there are some very weird choices such as rocks functioning as an indoor ceiling texture or paintings as decorative sprites inside what looks like a storage hall. Not that these are a huge deal but still slightly distracting. Lighting is good, especially outside the base where lunar terrain formations cast nice black shadows on the surface. For a short map there's quite a bit of monsters but they're of the variety that's easy to get rid of quickly, and the author has provided enough room for at least one person (you can tell the map was semi-intended for coop) to move around while fighting aliens. The outdoor areas rely on the underwater effect to simulate the Moon's low-gravity environment and it works ok for the sake of variety even if all the bubbles kinda kill the immersion (not to mention the fact that the Moon is not zero gravity while this map seems to think it is). There's a whole bunch of new sounds and a fitting soundtrack to really get you going, but all that extra adds more than 20 megabytes to the file size. 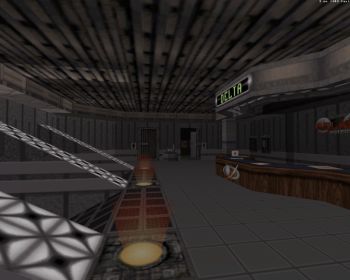 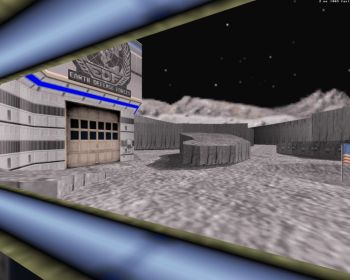