Description: It took nearly seven years but The Last Train to Marsville finally has a sequel. Delta Station Down is a medium-size space map that takes place on, you guessed it, Mars. HRP recommended.

Into It: The map starts off pretty slow with scattered enemy encounters to keep you on your toes, followed by a landscape tour to show off bits of beautiful Martian terrain. Action steadily builds up as you progress, culminating in a restaurant shootout. One major difference between Delta and the predecessor is the size of the gameplay area. Marsville had tons of cramped, dark and interconnected indoor areas while this one relies a lot more on bigger, brighter areas, a clear change for the better. The author is very good at teasing you with beautiful but unreachable outdoor areas with gigantic industrial structures standing tall in the background. Midway through the map there's a refreshing switch from the base's hi-tech segments to recreational areas. The map's biggest shortfalls is that it doesn't have much of a point. The readme points to some kind of a plot but it's not played out in the map at all so you're left with traveling from point A to point B without any bigger sense of purpose, which is no good for a map that otherwise seems pretty ambitious. Also, the map could have used a custom soundtrack; dethtoll for the millionth time just doesn't do the trick. (Remember you can navigate to your favorite track with Ctrl+F5. Streets worked pretty well for the map.)

Conclusion: Delta Station Down is a well-designed map, relying on tons of third-party textures and the HRP to boost its already impressive visuals. There are marked improvements upon The Last Train to Marsville, and hopefully the next part improves upon Delta's lack of storytelling. 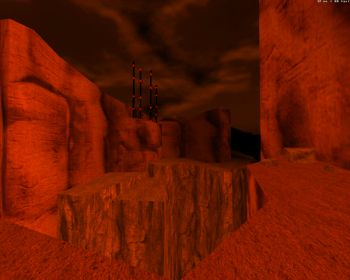 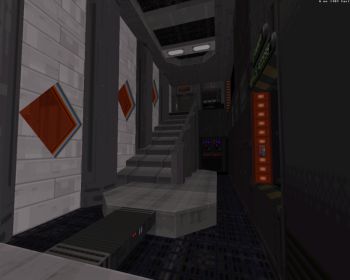