Description: An introduction level to an upcoming episode called Mars Base which is obviously set on Mars. The level is quite big, good looking and has a nonlinear gameplay.

Design: While the author recommends that you use the HRP I found no reason for this. On the contrary, you may in fact miss some cracks when playing with the pack. The cool (but not much used) fog effect works with or without the HRP and I really couldn't find any serious "glitches" (except for the sky which looked a bit off in several locations with or without the HRP) when playing the level without the pack.
As for architecture, the level looks pretty good with a nice mix of indoor and outdoor locations. The Martian surface looks particularly good with some nice shapes, slopes and seemingly bottomless pits. The level relies mostly on new textures and they blend in quite well with the red Martian surface and space/hi-tech theme. There's fair amount of details but I got kicks mostly out of its conceptual grandness.

Gameplay: Since this is just one part of a bigger (hopefully) episode, there's some backstory to be followed, although not much happens during this first "chapter". While you'll be dealing with keys and buttons the level is very nonlinear, a quality you'll either like or you don't. And because of this and because of its size (takes you around 30 minutes) there's also some backtracking. The first half of the map is a bit too quiet, with only a few enemies and a few ammo boxes. This is not necessarily a bad thing but I felt it went on for a bit too long. It gets better and you'll get less of those "Where am I now?" sensations during the second half.

Conclusion: The Last Train to Marsville is a very good start to an interesting upcoming episode. It puts the Martian theme into a good use and focuses on nonlinear gameplay. 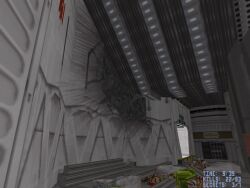 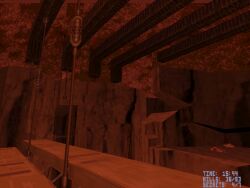