The Review: Mister Sinister experimented a bit with unorthodox fighting tactics in his previous map, Sludge Plunge. The results were mixed. This time he's gone further with the concept; Duke is now forced to deal with everything from simple Troopers to fat Commanders using nothing but his mighty boot and tripmines. As you might have guessed, the results are again bound to be mixed. Knowledge of Duke3D enemy behavior comes in very handy in this map as you try to outsmart the enemy into running into your traps: their movement speed, their health; every bit of knowledge is necessary for survival. Mister Sinister accommodates the use of tactics with decently sized rooms and carefully placed pillars that you can use to place traps on and outmanoeuvre the enemy. Overall, it can be both satisfying and tedious, but the longer it continues the less fun it becomes. Luckily it's not prolonged for too long and eventually you just might get your hands on more powerful weapons; it did feel like that's what you were fighting for, after all. There was one nasty and totally unnecessary timed-door puzzle that I cheated my way out of but other than that the map's puzzles seemed to rely on buttons & keys. The space station itself is nicely designed, being a mix of E2 style simple design with well-proportioned rooms and effective use of lighting, and Mister Sinister's own recognizable style marked by good texturing.

Conclusion: Close Range offers experimental gameplay within a well-designed space station. The map will challenge you, which you're bound to both hate and enjoy. By the end of it you'll be glad you experienced and hopefully survived the challenge but at the same time you probably don't want to play another map like this anytime soon. 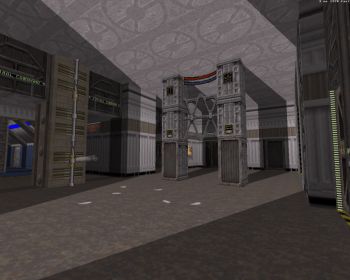 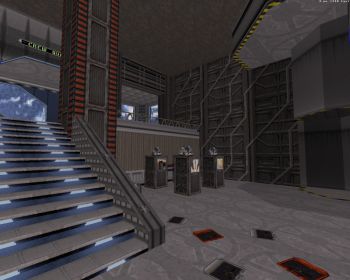