The Review: Our alien ass kicker has somehow managed to get captured by the aliens once again, forcing him to kick his way out of an underground prison. The idea of stripping Duke of his weapons at the start of a map has been there since Death Row, but it hasn't been used a lot in usermaps mostly because the so-called "mighty boot" is one of the lousiest melee weapons in the history of first-person gaming. Sludge Plunge does it pretty well, relatively speaking, pitting Duke against weak Troopers rather than anything stronger. Moreover, the cave section with its interconnected pathways provide space to move around. In any case, what may seem like a confined, even claustrophobic indoor map at first opens up bit by bit until you hit the last section, a large swamp area with even a short town section. Design is solid all around, as you'd expect from Mister Sinister, and the swamp section in particular looks great with its vegetation and effectively used green "water" (rather than the usual slime texture), which blends in nicely with the rest of the natural environment. This being a Mister Sinister map, expect a high count of monsters. As I've said before, I'm not a big fan of this type of gameplay as often it seems you're doing little else but holding down the trigger button. To be sure, it's balanced with tons of ammo and health everywhere, but it just gets a little tedious after a short while. Still, this is a well designed map with a rarely seen theme. It's got tons of action which you might enjoy to the fullest but personally I found it just slightly overstaying its welcome. 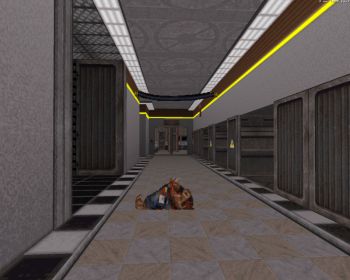 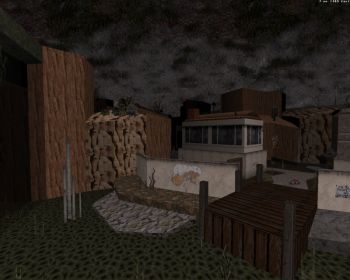