Three toughest sons of bithes on Earth are sent to Las Vegas to take down a terrorist plot to attack America. Unlike in other Rainbow Six games, in Vegas you don't get to travel across the world, chasing terrorists. Most of the action takes place in and around Las Vegas, Nevada, apart from a few maps in Mexico at the beginning of the game.

A Rainbow Six veteran may not instantly feel at home. Instead of having several teams you now have only one that consists of three operatives. And, unlike in previous parts, if the leader (that's you) dies, the game is over. Gone is also the ability to plan your missions before heading to the field but there's something so much better now - the ability to command your men while on the field (like in Ghost Recon). Just point your crosshair to a location and push a button to send your men to take the bullets! As for taking bullets, you can take as much damage as you want but not all at once. When you're taking hits you better take cover and let the wounds heal (this usually takes a few seconds). Not taking cover when the bullets start flying usually means an instant death. 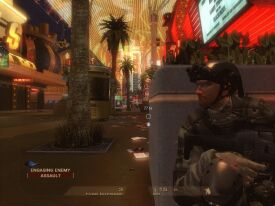 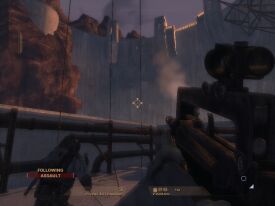 Now, with only two buddies and one life you better hope the AI is better than it was in Ghost Recon: Advanced Warfighter. And it is! Your buddies avoid picking strange routes randomly and know how to take cover. And taking cover is what's done so well in this game. You can use all kinds of objects - tables, pillars, walls - anything to hide from enemy fire and enter this cool cover mode where you can use the cover to bend your body (by using directional keys) in various ways that help you fight the enemy. It may sound complex but it's quite versatile. Note that your enemies also know how to take cover and may not come out so easily. But you can always use your buddies as baits. Saving is done automatically at checkpoints and not often enough - sometimes only once per map.

There are other useful changes too. Before entering a room with a closed door you can use this cool "Snake Cam" to take a peek inside before entering. You have several ways to enter a room and most of them should involve making your buddies do most of the work. For dark locations you have the standard issue night vision goggles and a cool thermal (or "Predator") vision.

Most of the action takes place in and around Las Vegas. You get to clear streets, casinos, hotels, restaurants and so on from terrorist thugs. The last mission takes place around Nevada Dam. Bloom effects have been put into heavy use which makes Las Vegas look very pretty and realistic with its glowing signs and buildings but it also makes the field of vision seem a bit murky. One of the best things is seeing the whole glowing city from a helicopter, just like in GRAW. The game ran without problems on my E4400/GeForce 7.

Conclusion: Vegas brought in so many important changes that it's hard to go back to what Rainbow Six was a few years back. Hopefully the next Rainbow Six game - after Vegas 2 that is - has more variety in terms of locations. 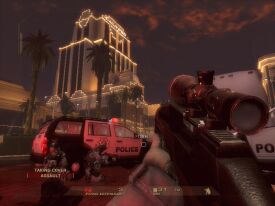 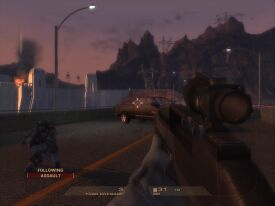