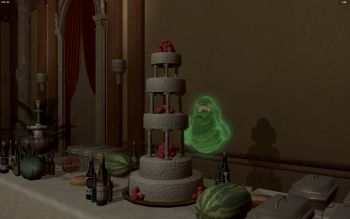 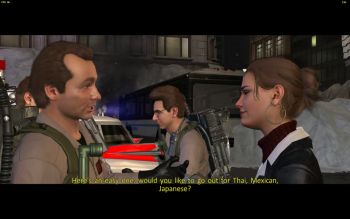 Ever wanted to be a Ghostbuster, but your mom wouldn't buy you a Proton Pack, citing poor household finances or some other stuff you didn't understand at all? Well, here's you chance to show your mom that you managed to make it after all, despite her best attempts to prevent you from realizing your dreams. In Ghostbusters: The Video Game you're the rookie, it's 1991 and Ivo Shandor, the evil architect from the first movie, is back, wreaking havoc in New York City.

The game excels in its use of the movie franchise. The original cast returns as voice actors on top of which Dan Aykroyd (Ray) and Harold Ramis (Egon) were involved in writing the game's script. Locations, music as well as sound effects from the movie are in the game. All in all, it looks and sounds like a Ghostbusters movie. The best part is, of course, voice acting by the original cast which includes tons of jokes (delivered mostly by the great Bill Murray's Peter Venkman, albeit unenthusiastically) and technobabble (Ray & Egon). Winston "Token" Zeddemore gets to deliver more lines than he did in the two movies combined. Alyssa Milano, one of my first crushes, also makes an appearance. 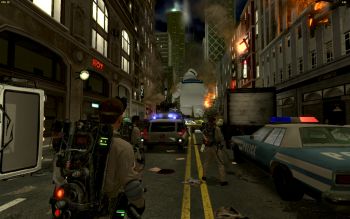 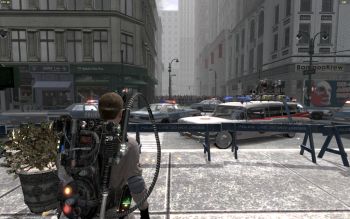 Gameplay feels a bit awkward at first, as this is one of the few 3rd person shooters I've played. Wearing down and then capturing ghosts seems a bit tedious at first as you need to get quite a lot of damage done before ghosts can be captured. However, through learning and better upgrades you should be a Ghostbusters employee of the month in no time. This actually makes sense as you're supposed to be the rookie when the game starts, not a full partner. Each level has one or two bosses, a bit more mid-level ghosts and lots of standard issue ghosts that usually don't require capturing. There's enough variety in the ghosts' behavior and wearing down methods to keep things interesting throughout the game. There are several spots where your AI teammates have major issues staying alive (they can be revived), which turns ghostbusting into running a clinic. But I've seen much worse AI teammate behavior than in Ghostbusters.

On top of this there are all kinds of little things that spice up the gameplay. You make money by capturing ghosts which can be used to purchase useful upgrades. Each level also has several hidden artefacts that too net you considerable sums of money. These things can be found with the aid of the PKE (Psycho-Kinetic Energy) meter which can also be used to measure ghosts' attributes such as their weaknesses. Weaknesses tell which of the four Proton Pack firemodes you should use. The game also keeps track of things like the value of all the property you have destroyed, a log of captured/scanned ghosts, discovered artefacts, play time (took me around 8 hours) and so on. Plenty of attention has been paid to tiny details on the Ghostbusters' equipment and character models look like their movie counterparts.

Perhaps the game's biggest weakness are its levels. There are seven levels altogether, each one divided into two or three sections but impressive visuals and memorable moments can be counted with the fingers of one hand (okay, maybe two). The movies were semi-scary but there's none of that in the game. Even the NY Public Library is just a generic, seemingly never-ending collection of book shelves with none of the scariness the first scene of the first movie had. Some of this is due to the 3rd person view, some due to poor lighting effects (and by this I mean interactions of light and shadow, not the impressive Proton stream light show that takes place every time you capture a ghost). There's also less interactivity that one would hope. Even jumping is useful only in making the character go a bit faster. There are several fun but simple physics puzzles involving tossing sticky slime on objects in order to open up routes but that's about it as far as puzzles are concerned. Pretty much everything else is solvable with the PKE meter.

Conclusion: The game is not without apparent flaws and the 3d person view doesn't really make you feel at home at first. But the game succeeds in making you feel like you're a part of the team and a part of the franchise. While capturing ghosts is fun and not too difficult (on normal), the game would've benefited from being a bit scarier and having more interactivity, which is now pretty much limited to the pre-mission firehouse/HQ level. Still, any fan of the two movies should definitely give the game a try and relive his childhood. Too bad they didn't let me drive the Ecto-1. 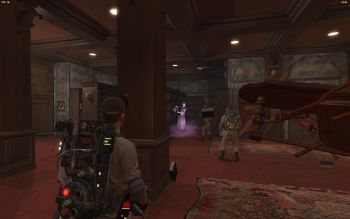 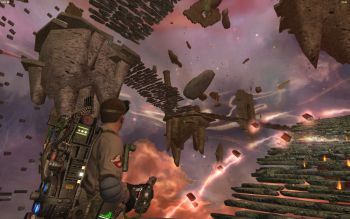 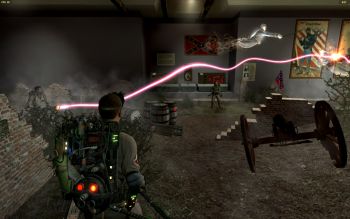 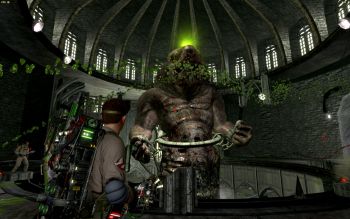