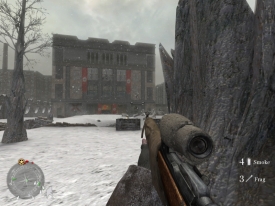 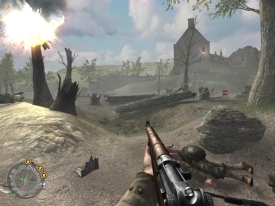 Take everything that was wrong with Call of Duty and multiply it by a million and you get Call of Duty 2. All the basic stuff is recycled from the first game from scripted gameplay to similar locations (for understandable reasons though: we had only one WW2). Once again, you're served with three campaigns (Soviet, British and American) with the Soviet campaign being the most tolerable. Occasionally, you get to drive a tank or be a gunner in some capacity.

A combination of three factors spoil the gameplay. First, like in CoD and MoH:AA, enemies are respawned from certain spawn points until they run out or you deactivate the spawns. If you don't move your ass, it seems that the enemies never stop coming. If you get stuck like this, the game turns into a WW1 type of trench warfare. This leads nowhere so this is where rushing comes in and to make it work, there's the new health system, the second major flaw.

The health system, new in 2005 but old news by now, regenerates your health so that you can take as much damage as you want, just not all at once. A house full of Germans is clear in five seconds as you rush in, all by yourself (you actually have to hope that your friends stay out as they're more likely to kill you with a grenade than the enemies are). You can be as wild as you want, just make sure there's cover nearby where you can regenerate your health for a second or two and then jump back in to finish off the Krauts. The developers must have thought that now that the player has an infinite supply of health, they might as well intensify combat a bit. 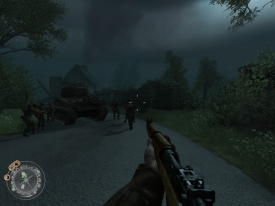 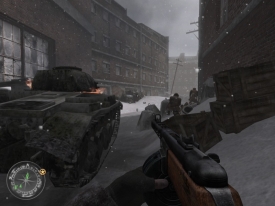 The third problem is grenades. Unlike in CoD, there's an indicator now which tells you that a grenade has been thrown and in which direction it is. The problem is that, like the health system, this indicator seems to work as some kind of a justification for the kind of grenade spam you haven't even seen in Strike at Karkand (a BF2 map).

So, you've got a problem in your hands when the enemy respawn system combined with infinite health encourage you to rush but at the same time the regeneration system is used as a ticket to make battles even more hectic. Everything is scripted and there's no replay value because everything happens exactly the same as the first time you played. Also, while the first Call of Duty took me "only" four hours, this one took me an almost unbearable six hours. There's a rather good multiplayer mode but I wasn't able to test it with a heart because of some problems.

There was one good mission though, the one where you get to snipe mortar teams from a silo roof. Not coincidentially, this is also the one part where you don't have to worry about rushing, grenades or your so called "friends". Also, nice graphics overall as the screenshots accompanying this review show.

Conclusion: I'm gonna end this downbeat review with a bit of comic relief by quoting Gamespy's Call of Duty 2 review (funny parts in bold): Call of Duty 2, without really deviating from the formula that made the first game a hit, manages to remain immensely exciting and entertaining from its first shot to the last. With one sprawling, chaotic battle after another, it's filled with set pieces that play out like a WWII movie and yet has enough openness and variety to stand repeated playthroughs.

I wonder how much Infinity Ward had to pay to get such crap out of Gamespy. 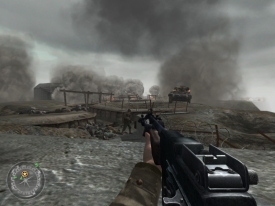 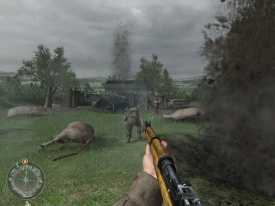