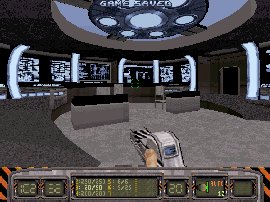 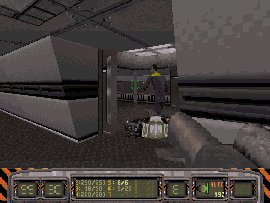 I have never watched Star Trek so stuff in this TC is strange for me. Borg Nukem is a standalone game so you don't need Duke3D at all to play it.

-Levels:
Levels are excellent. They are well designed, they have good shadows, good new textures, good gameplay (perhaps more health packs would be good) etc. Sixth level in first episode was quite difficult during the first try. It had countdown of 10 minutes before the mission fails. It had some annoying issues. Each level was equally good so none of them was clearly better than another. Number of single-player levels is also good (13 - divided in two episodes + 2 secret levels). Levels are pretty easy too and they can be completed quite fast (especially the second episode). Third episode is for Dukematch. DM-Levels are very good looking but I guess nobody will play them.
Score 9/10

-Enemies:
If you have seen the civilians in GOD TC then you know what to expect. Enemies are some guys/robots from Star Trek (still not familiar to me). Compared to SST TC's or Duke3D's original enemies these are quite undetailed and messy. They also bug sometimes. They might just stop (and you can't kill them then) or walk agains the walls. Perhaps the animation is the factor which makes them look so stupid/helpless. More original Duke enemies would have been good (Protector Drones are there but rarely) - of course they wouldn't fit the theme but...
Score 6/10 -Weapons:
Weapons are quite good. RPG looks a bit undetailed (but it has nice firing effects) and pipebomb looks too much like a ball. Shotgun has some nice particle effects but this thing might cause some lagging (some other things might cause lagging too). I couldn't see weapon no7 anywhere else than in dukematch levels.
Score 7/10 -Other:
Textures are very well done and they fit with the levels (and Duke).
Sounds suck. Borg's world sounds too silent. Ambient sounds are quite poor if we compare them to other TCs. Enemy sounds are terrible. However walk sound and weapon sounds are good. I wasn't able to play music because of my soundcard which doesn't support Duke3D.
Jump system seems to be new. But why? It's more difficult to use than the original so why it had to be changed (you won't even use it much)? It also feels like Duke's speed has been increased a bit (or is it just me?). To enjoy playing I had to keep walk mode on (and it felt very good that way).
You'll also see a new animation when you finish Borg Queen but you probably won't find out what happened in it (but it's better than nothing).
Score 7˝/10 Lastability: Good TC but I was expecting it to be more Duke style with more original Duke enemies and sounds:
WWW:http://borgn.totalconversions.com/
Version: Does not require Duke3D
Author: Kevin Cools & team
Size: 20Mt
Score: 8