For some reason this incarnation of the AvP franchise has been panned by critics (with whom I usually agree) but I found the game exceedingly enjoyable. The concept is the same as in the series' two previous parts: you get to play one medium-size campaign per each species. You can play the campaigns in any order you choose, playing one map per species at a time or complete an entire campaign for one species before moving on to the next etc. The three storylines intersect but you don't cross paths with the other characters.

The campaigns are pretty much what you'd expect based on the previous parts. The Predator and Alien campaigns are more "tactical", in that they put you in the position of the hunter and you get to choose between action and evasion. Alien is fast and capable of walking on any surface but is weak and has only melee weapons. If you wish to wipe out a room full of humans you need to do so one by one. Hanging from the ceiling and luring them to you is one way to go but sometimes you just want to skip the fight and use whatever air ducts available to get to the next room. One thing thing I didn't like was the absence of a quick move that could kill your enemy without a long animation. Predator is slow but boy can he jump high and with his cloaking device you are invisible to humans. Like before, the shoulder cannon consumes energy but is a very effective ranged weapon. The Disc can take out several foes at once and the spear is a good energy-efficient alternative to the shoulder cannon. All in all, Predator's arsenal is tons of fun but it too is missing a quick way to kill enemies from up-close. Also, jumping feels a bit limited as your "landing spots" have to be determined before making a jump. Of course this enables you to jump only where you're supposed to but it still feels like a needless concession to console gamers. Playing as either Alien or Predator makes you appreciate the game's AI. Sometimes your attempts to get your enemies where you want them just doesn't work, which is simply because they're not that stupid. 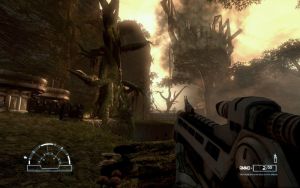 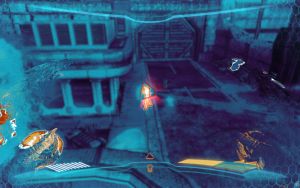 The Marine campaign has a bit of different perspective because you're the hunted. While Aliens and Predators are pretty much always masters of the situation, stalking their enemies with confidence before striking, the Marine constantly has to worry about every shadow, feeling powerless against overwhelming odds. Playing as Alien or Predator you get to pick your fights: the Marine is in no position to make such a choice. The first two weapons you get your hands on, the pistol and the pulse rifle, are incredibly weak. The pistol is one of the worst "first weapons" I've come across in a first person shooter and the legendary pulse rifle cannot hit anything. But luckily you can soon switch to a shotgun and a sniper rifle, both of which are capable of taking down an alien with one well-placed shot. (The shotgun is slightly worse due to the fact that you have to let the alien come close to you which is a bit risky due to their acidic blood.) There's also a flamethrower but it too is useless as aliens, despite being on fire, remain functional for a good while. For the smart gun you need to sacrifice the rest of your primary weapons (you can carry two primary weapons and a pistol) but it's intended to be used in special situations only and packs tons of firepower.

There are only about six (single-player) levels in the game but it's not even nearly as bad as it sounds. In fact, I didn't mind at all going through the same locations as different characters because the perspectives are so different and the whole thing makes you feel like you're just a small part of a much-bigger conflict. There's some variety as you travel from confined colonies to open jungles. There's a story involving the evil Weyland-Yutani corporation and it's played out pretty well although the concept has been done to death. You get the most out of the story when playing the Marine campaign but the order in which you play isn't really important (after all, it's not like you as, say, an Alien are even supposed to know what W-U is up to except for the part involving the safety of your Queen). And of course everyone loves Lance Henriksen so you'll be pleased to find out that he appears in the game as another Bishop-model droid and delivers lots of sexy lines (mostly via audio logs ŕ la Doom 3). The levels carry a considerable amount of movie-like atmosphere, especially when playing the Marine campaign where you have to be constantly on your toes, particularly during the first two levels. In fact, the atmosphere works so well that the game is at its best when you're not fighting. Boss (& miniboss) encounters are among the best of the genre.

There are some problems too but nothing major. There's no manual saving which wouldn't be so bad but the autosave feature doesn't seem to save your weapons so your arsenal at the start of a save is determined by the game. The "trophy kill" sequences cannot be aborted which makes it a bit risky to use them in the first place. As said, the game lacks quick stealth kills. The Marine has no grenades (would be useful against eggs), none of the characters can crouch and you cannot aim down the sight. Switching between characters may take some time to get used to which is why you might want to complete a full campaign per each character before switching. A lot has been said about the game recycling tons of material from the movies & earlier games. Yeah, so what? There's a multiplayer mode which seemed pretty fun but there were only a handful of non-ranked servers available at the moment of writing this review.

Conclusion: I bought this game because it was on sale on Steam and because I'm a big fan of both Alien and Predator franchises (the two AvP movies suck big time though). I'd have given it a pass based on the poor reception it's gotten but I'm glad I didn't. The characters are tons of fun, the levels pack a lot of atmosphere and Lance Henriksen is there for God's sake! It's not flawless; concession to console gamers are noticeable and the story isn't much to talk about but it's carried out pretty well nevertheless. If you love the movies and the previous AvP games you should give this one a try. 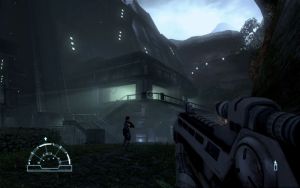 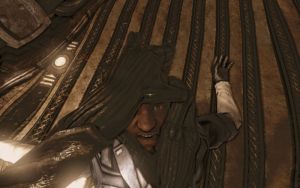