DukeNukem Vs the Army of Death BY FAKIRBABA Another mini-pack from Fakir (check "Duke VR"). Castle Camelot has been taken over by a bunch (a big bunch) of skeletons and your mission is to bone 'em to death (ain't they dead already?). The pack features three levels, two new enemies, lots of new art & some sounds/music.

This is how it goes: You step into a room, yard or whatever and find out that you're being approached by a huge army of skeletons. This is where you reload your gun and start blasting. The normal-type skeleton is a weak dude - three pistol shots is enough to take one down. Shotgun is a bit slow when you're facing dozens of enemies but chaingun really is something. The levels are balanced so that you end up using all weapons and all bullets. The second new enemy is this brown skeleton which is a bit tougher & slower. You won't be seeing them much in the beginning.

Level theme is medieval. First two levels are mostly outdoor. The first one has some incredibly beautiful landscapes filled with good looking textures from Shadow Warrior, sounds of birds singing and dozens of skeletons. The second level is a combination of the first one & the third one with both indoor & outdoor locations (not as beautiful as the first one but still good). The third level - the Camelot itself - is huge and filled with massive amounts of skeletons.

In the end this mini-mod is very simple and fun most of the time. It gets repetitive in the end - especially in the third level where you start wishing that the next room on your list would be empty so that you could take a breath before heading into another combat. Three well designed levels (two of them being quite short), beautiful landscapes and lots of skeletons - Give it a try and enjoy the blast of your life. 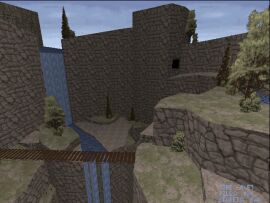 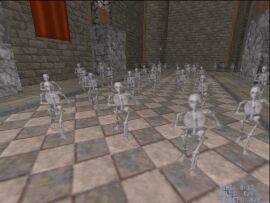