After finishing Call of Duty 2 last summer I kind of noticed how tired I am of these WW2 shooters. I liked Allied Assault and the first Call of Duty seemed to set the bar even higher but after that these games have gone nowhere. Brothers in Arms was nice because it emphasized strategic planning and executing. But it seems that they have squeezed pretty much everything they can out of WW2. The world needs a new major war.

Medal of Honor: Airborne recycles the same old recipe with a few worthy new ideas and a handful of bad ones. The first thing you should notice are the controls. First, you can't move while aiming (and there's no option to toggle aim). Second, there's considerable mouse lag (I heard they tried to fix this in a patch but I wasn't too interested in downloading a file weighing one gigabyte). Third, you can't go prone. It's beyond my comprehension why these changes were made unless, of course, the game was developed with the low-IQ console crowd in mind. 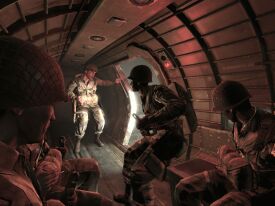 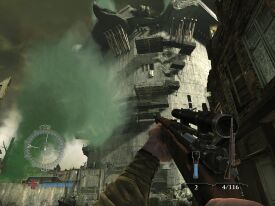 The gameplay has not changed a bit since Call of Duty. You still have to slaughter dozens of nazi spawns until you're smart enough to move. In fact, since aiming is such a bitch in this game I ended up rushing the whole game. The enemy AI is so bad that rushing really seems like the best way to play. Even if a room is full of enemies you can just go there and kill every nazi. This is particularly easy thanks to the ridiculous health regeneration system which lets you take as much damage as you want but not all at once.

The levels are not that bad. Every level begins with a nice para drop from a plane and you get to choose where you land. The levels are nonlinear in that you can choose the order in which you decide to pursue objectives. After completing an objective you open a checkpoint. The new system didn't quite open up to me until the fifth level (there are only six in the game but they're big). A couple of times after dying I noticed I was being dropped from a plane again and thought that the game had not saved and in frustration I quitted. The next time this happened I noticed that despite being dropped from a plane the objectives you had completed by the time you died remained completed. The manual did not mention this feature so needless to say I was a bit confused.

There are some small gimmicks such as abilities and medals/ribbons/badges that you can unlock by killing enemies and completing missions at different skill levels but who cares about these anyway?

Conclusion: A disappointing continuation of the Medal of Honor/Call of Duty serie. All the small improvements get lost in the middle of repetitive gameplay and limited player controls. Luckily I got this from a friend whose machine couldn't handle the game so no money was lost. 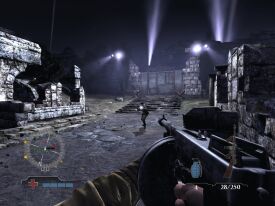 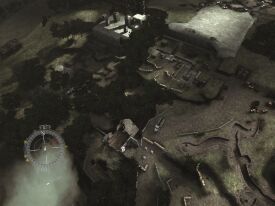