This is a medium-size city map with a few hi-tech locations and a sewer. Its author, Forge, has been reviewing maps at Duke Repository for some time now and while doing it he has learned quite a few tricks about how to make a worthy Duke3D map. During my two playthroughs, I was trying to figure out whether Duke 3:16 is a hottie or "just" a map. while it's an oustanding first effort, there are several issues which drag it below the "Hot Map" limit (85 points).

But before getting into that, the good points first. Three areas really manage to stand out even though none is quite as polished as they should be. First is the main outdoor area, a street filled with signs of war. You'll notice a few things such as buildings outside the gameplay area, which provide a sense of depth, some light poles (with wiring!) and good spritework (electricity generators). Second noteworthy location is a warehouse with lots of conveyor belts. You know a mapper is doing things right when a location reminds you of Gambini's maps. The third area is the final area, a rail yard with a good looking crane structure. Some clever ideas are visible around the map and in general it shines through that Forge knows what it takes to pump out a good level.

The bad points are mostly related to below average gameplay balance and general sloppiness. The entire map could have used a lot more polishing. As it is now, there are too many cramped locations, too many oversized objects (not many in absolute sense but they're still noticeable) and too many clipping errors. Sometimes you get all three in just one location where you have a cramped hallway with plenty of oversized swinging doors (some of which have a tech texture usually meant for normal Doom doors) blocking your way. And while there are some good indoor locations, there are also some bad ones with bland texturing/trimming, oversized hallways and non-existent lighting. The quality difference between the warehouse and the building from which you'll get the red key card is huge. Also, the warehouse has an ingenious puzzle but you can accidentally fuck it up so that you're unable to continue the map without restarting.

The map suffers from a shortage of ammo and health. I was forced to rely on RPG a couple of times, not a good idea when you're confined to cramped hallways, and I was constantly running low on health. When I was face to face with two Battlelords right before the end, I had only three RPG rockets left and a few clips in my pistol. The only way I could beat the map was to run right past the two bosses and hope that I make it to the exit before they get me. I did spot a few Devastator ammo packs but never came across the weapon itself. Essential items should never be hidden.

But anyways, Forge has a few things he needs to keep in mind for his next level but for a first map Duke 3:16 is brilliant, with many downright impressive details and some good puzzles. However, he needs to give the player more space and do some more polishing and most of all he needs to provide enough ammo and health just to be on the safe side. 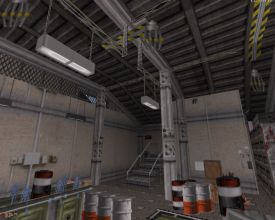