Intolerable Threat is an add-on for HL - Opposing Force. It features a new adventure as Gordon Freeman where your job is to pursue the mysterious g-man and eliminate him. G-man is planning some actions agains the US government and it's your job to enter his base and make sure he'll never commit any actions against government.

The first problem with Intolerable Threat is that you're supposed to be a Gordon Freeman - friend of scientists & security guards. But almost all of them are afraid of you and each security guard attacks you (well they're working for the g-man but still). Also soldiers talk to you as their commander Shephard which is the main dude from Opp.Force. So here we face the difficulties of making a mod for Opp.Force.

Level design is good and interesting. Some levels are more detailed than others. IT is full of large outdoor areas - even indoor areas are large. There's no Xen - only military installations & research centers. There are even some city streets in the beginning. Facilities look pretty from the outside, especially in the end side of the pack. Even end part is mostly same military bases, there's still enough variety to keep you interested. But there isn't really anything mind-blowing.

Combat varies some. In the beginning you'll fight against groups of grunts. After that you'll start facing some of those race-x aliens. I didn't understand at first how these aliens got here - after all this is happening after the original HL. But perhaps it's just that g-man who's using these as his own armies. End side is filled with big combats against big groups of grunts. You're given lots of health & HEV suit machines to use. There are also some planes, helicopters & gargs, all of which gives you a good fight.

Something is missing from the atmosphere of this pack. Sometimes you have some fellows soldiers by your side but I think the lack of atmosphere is due to lack of friendly scientists, security guards and scripted sequences. There were few simple scripted sequences but nothing you will remember the next day. End 'fight' with g-man was good but it could have been longer & better. Weapon sounds have been replaced with new & more powerful effects. They sound very nice. Enemies also have improved pain & scream sound effects.

Is it worth downloading? If you have Half-Life & Opposing Force and you enjoy playing longer single-player mods then IT is a good gift for you. It's not too hard and it sure isn't ugly. But still - there's nothing very special about it. 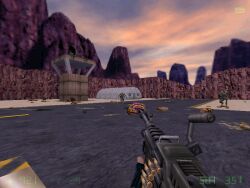 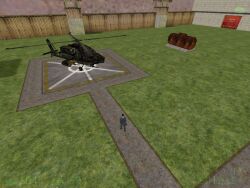