Description: William Gee - The Falcon of New Zealand - is back with a huge city map. The level requires Jonof since it breaks the old sector limit. It's also recommended that you play it in Classic mode since you might miss some of the cracks - but I had no trouble playing it in Polymost mode. The readme also states that the level might crash but at least I didn't experience any difficulties.

Design: Like a mix of Roch and original city maps - everything is just ten times bigger and better. It's very unlinear and at least 95% of the gameplay takes place outdoors. Spritework has been used very often and it works - the level looks very 3d-ish. Tons of details and excellent terrain design. The city has been devastated by some sort of bombings or something since it's all torn up.

Textures: Far less colorful than Red or Roch maps. Couldn't find anything that'd have drawn my attention - it's all pretty standard with good trimwork all over the map. It has kinda creamy look with all those light brown textures and a nice sunset sky.

Gameplay: As stated - it's VERY unlinear. You'll be travelling a lot thinking where to go next. There's always this feeling that you missed something since the level is so big. Since most of the action takes place outdoors it's never quite clear where to go - every direction is available. Find the first key and it gets a bit more clear. There's also some jumping involved which brings some nice variety. The level offers challenge even on s1 - especially near the end where the action just seems to accelerate.

Innovations: Hard to tell. There's nothing we haven't seen before but the level feels original - it owes some to Roch levels but it's still definitely its own chapter and Gee's style can be easily spotted.

Conclusion: Huge city map with very unlinear and very impressive and complex design. Might get a bit tough near the end but that's just the fun of it! 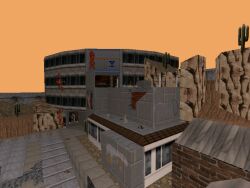 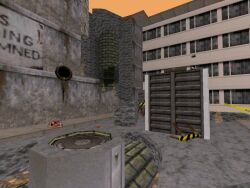