Description: A Christmas map from James - who has never before released a standalone uesrmap - which heavily exploits some of the new tricks of DukePlus (available here).

Design: The map is a combination of good looking, snowy outdoor locations, caves and hi-tech areas. As one might expect from James, the level is not heavily detailed but it has some amazing lighting and a good set of gray & white textures that fit well with the theme. Outdoor locations are the best looking. James has placed some X-mas decorated houses in the distance to give the map a really nice atmosphere along with the snowing effect from DukePlus.

Gameplay: Here DukePlus (needed to play the level) plays a big role. Some of the new effects are good but not perfect. Hearing footsteps is a good idea but the sound it makes is too fast, making it sound a bit stupid when running. You can climb walls, an effect which has been put into a good use in the map. The new ladder effect is good and well used but climbing makes an odd sound. Walking speed has been reduced which, in my opinion, is not a good thing. The new "jump pad" effect has been used to make wind tunnels - not a bad idea. Duke's old foes make an improved appearance with some new guns and improved health. Out of these I had problems only with the Commander who now has homing balls of fire which I found a bit annoying.
So, as for DukePlus, I found mostly positive things to say about it and the map clearly benefits from it.

Conclusion: Christmas came early - Wonderful Christmas Time is a well designed level with a somewhat new type of gameplay that mostly succeeds in what it tries to deliver. 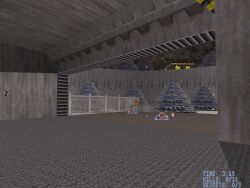 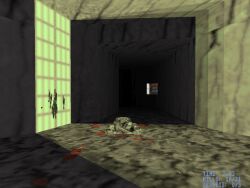