Design: It's very basic since there aren't many details. It's like the original E2 episodes - just in a bit bigger scale. And because the scale is a bit big the level feels open - but not in a disturbing way. The way some of the crates have been scattered around the level is a bit repetitive and a dull way to add details. Force fields lacked the usual force field effect. Lightning is good and also follows the traditional 3DRealms -style.

Textures: It's the usual e2 set with good trimwork and no problems with texture alignment.

Gameplay: Very standard - buttons, keys and monsters. There were some nice combats around the map - such as the Battlelord ambush and a few locations in the beginning where you had to fight some mini-Battlelords with standard non-explosive weapons (or did I just miss the RPG?) There's quite a lot of backtracking but it doesn't get confusing thanks to well placed monster spawns - they show you the right direction.

Conclusion: A standard space map with a bit bigger scale than what we have gotten used to. Design is a bit basic but texturing and lightning saves the day. Could use something that'd catch your eye. 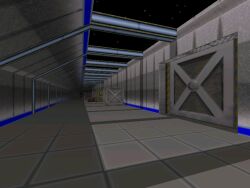 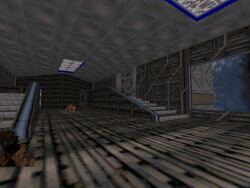