Description: "Undesirable Elements", the name of the actual map, is set on Europa, one of Jupiter's moons. It's a hi-tech/space map with a good bunch of puzzles and some innovations.

Design: Space maps are somewhat scarce so it's always nice to have one. The level takes the theme and puts it into good use. But I have two problems concerning the design: texturing and lightning. For example, the corridors in the beginning that go around the central structure look a bit bleak with both little variety in texturing and little lightning effects. However, this is not the case with most of the rest of the map. For example, the conference room near the surface section is a good example of an effective use of textures and sprites (another good example of this is the big reactor room).

Gameplay: With a relatively small number of enemies (it's a 15-20 minute map) the map is more into puzzles and atmosphere. In one of the level's key locations you need to avoid a Cycloid Emperor (kinda reminded me of an old map called "Lair") instead of killing him. There were some other tricky parts too such as when you get to the top of the reactor room you need to do some jumping. The "floor climb" near the end (see "Innovations") also provided a sense of progress instead of the too standard linearity where you move from one x-axis room to another. The map certainly puts both "axises" into good use.

Innovations: The map has got an elevator that is able to move up floor by floor. The effect is not a new one but has rarely been used and it's been put into good use here.

Conclusion: "Undesirable Elements" provides a well satisfactory gameplay experience. In terms of architecture some of the level's locations could have used more work but most of it stays well above average. 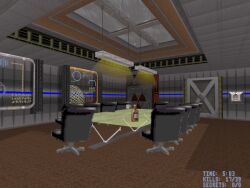 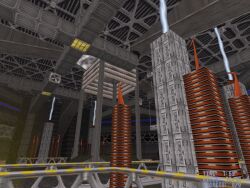