Description: Crumb's first Duke3D usermap - before this he has only released a bunch of SST TC usermaps. Working with the TC has clearly left marks in Crumb's latest level as well - 'Voices of Authority' is a mission-based level with lots of cool effects & architecture.

Design: Clearly follows the theme Crumb has used before in his SST TC usermaps - Scale is quite big. There are more open spaces than small rooms filled with stuff. Architecture is amazing - it looks superclean and combined with some excellent texturing & never-before-seen design ideas & structures the level's design is one of the best I have ever seen in this game. The reactor/Sheridan weapon has been very nicely built and the way it has been divided among many levels looks great. Oh and that 'Sheridan' logo looks very nice.

Textures: Just perfect - The level uses only a few colors (which tend to be white/gray/black) which gives it a lot of realism. Trimwork has been used very often and it shines - one of the level's highlights.

Gameplay: Like Crumb's previous levels this one's mission-based as well. You have to activate a bunch of things before you can destroy the approaching alien spaceship. At times the hallways of Sheridan feel a bit too quiet - especially in the beginning (wouldn't mind seeing a few Pig Cops around the level) where it's just you & a bunch of Troopers. You also might get the feeling that you end up spending too much time in elevators (although understandable considering the plot). Medium size and not too difficult - puzzles are great.

Innovations: The idea of turning the generator online is not that new and this is not the first time you destroy an alien vessel but the idea still feels fresh and the architecture is very unique.

Conclusion: Design deserves a ten - gameplay doesn't feel that dynamic after you have played a bunch of SST TC levels from the same author. Very interesting & well constructed missions but could use a few more monsters. 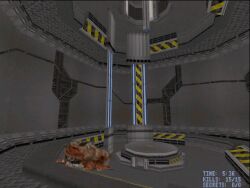 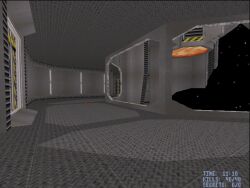