Description: V5 always holds a place in my heart as one of the first maps that actually impressed me. I got my hands on this piece back in the summer of 1998, a year before MSDN was launched. I used to know the level as "Moonland". It seems that some asshole stole V5 (by Ryan Isenberg who also worked on The Gate and made such maps as Hive Duke) and renamed it. V5 is the real name and Ryan Isenberg is the real author.

Design: V5 shares a lot with Ryan's "Hive Duke". Both maps have a center filled with purple lava, both maps are unlinear and the architecture is very much the same (both being hi-tech maps). Lightning is realistic and the Moon terrain (both above and below surface) looks particularly good (see the cave/mine area).

Gameplay: Back in the days "scripted sequences" were rarely used (the level was released before Half-Life). V5 features two neat effects, a pod crash landing through a moonbase wall and a rocket that you use to escape. The map is unlinear but easy to navigate. There are plenty of cracks on the walls that connect different parts of the level. Monster/ammo ratio is good and there are some useful (worth-seeking) secret places to be found.

Conclusion: A classic, one that you should not miss. One of the best space maps and one of the first ones to feature original scripted sequences. 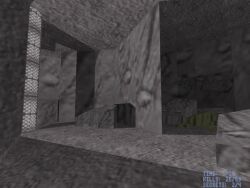 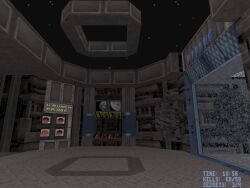