The review:: The name "Vedran Jelenic" should ring a bell. Vedran was among the first top builders, learning how to use Build right after the game got out. Despite this, he has only one "great" level, Canyon City, which was his submission to a DukeInc contest held back in 2000. (The winners never got their prizes, by the way.) His other noteworthy levels are City at Night and this, Urban Chaos from 1997.

Urban Chaos represents the kind of big, open, nonlinear city maps that were popular back in the days. (In fact, almost all of Vedran's notable single-player maps are of this type.) The problem with such maps was that in trying to be big in terms of geographical size they ended up putting quantity over quality, a tradeoff exacerbated by the old sector limit of 1024. Urban Chaos is much shorter than its predecessor Dark Alley, which is good because it has allowed Jelenic to concentrate on quality over quantity. While the level's design is not groundbreaking (although it could be argued that Jelenic was among the pioneers of this type), it still provides enough eyecandy to make a pleasant journey throughout the map.

Gameplay is typical to a map of this type. There are many locations most of which are entirely optional so how fast you end up where you're supposed to is a matter of luck. There are only a few locations where you need to go so the level may be over pretty quickly but I ended up spending around 15 minutes with it, not a bad thing if you wish to see everything there is to see. The map could have used a lot more monsters, especially respawns to spice up the streets but it should be noted that the included cons cap your non-Atomic health at 50. The ending is rather abrupt, as if merely a matter of entering another building. 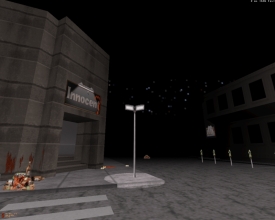 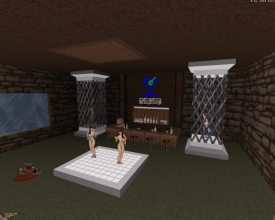