Description: Turok 2 continues with its predecessor's (also available on Steam) jungle/temple theme. The clever ones might have noticed that the map draws inspiration from the Nintendo 64 game which I never played so I might miss some obvious influences.

Into It: The map can be roughly divided into two parts with the first one comprising mostly outdoor and cave sections, and the second one taking place inside a temple. Outdoor design looks pretty good with its expansive caves and thick, jungle-like vegetation. The insides of the temple boast some good visuals too with its pillar-infested halls and long, fire-lit corridors. Easily the biggest problem design-wise is the map's often monotonous visuals with its rather repetitive texturing and bland lighting. There are many rooms, including cave sections, with uniform and rather bright light levels despite the fact that there are no noticeable light sources anywhere near. This is in unfortunate contrast to the much better lit corridors of the temple. The map's best aspect is its gameplay. While there's nothing groundbreaking about it, it's just perfectly balanced, if not very challenging. Enemies are thrown at you constantly but never in exhausting amounts, and their placement around the map encourages the player to keep his eyes open but without having to be afraid of cheap tricks. The fast-paced feel of the map is further aided by the included OGG track and some "new" sound effects. The ending is a bit abrupt but a sequel is on the way so hopefully we'll get a better climax there.

Conclusion: Turok 2 is a bit mixed with respect to design; while its architecture and outdoor design are good and sometimes even impressive, its texturing and lighting in particular could have used more work. Gameplay is the map's strongest suit; the map maintains a high but fair pace throughout its 15-minute length. 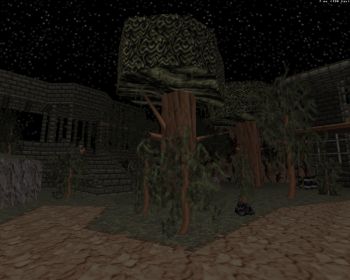 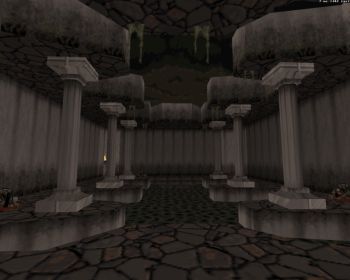