The Review: Another in a series of abstract, "wacky" usermaps by MRCK, this one being a loose remake of Freeway, the Episode 3 secret level. Now, when I say "loose", I really mean it; aside from the starting area and a few collapsed buildings, the map doesn't share much with the original. Like Salvage, this one too has that "sloppy and fast" design; it's not that textures are misaligned or poorly thought out, just unconventional and with not that much in-your-face detailing. Here it doesn't look quite as "appealing" as in Salvage Title though, probably because Turnpike consists of larger areas that are harder to detail (not to mention the rather significant freeway area has a uniform light level, giving it a bland overall look). Still, there are times when things that shouldn't look good manage to do so anyway, like the map is resisting conventional beauty standards (at times a bit too much so; the first underground area is just plain ugly).
Gameplay isn't much to my liking. This is one of those maps where you just stumble upon things. I never found the blue key, found the big freeway area by semi-accident, etc. The major freeway area has viewscreens next to two card slots, but because I had visited the area they were pointing at earlier, this got me a bit confused as to what they were trying to tell me (should I go there now again, or are the clues there in case I didn't already visit the area?), so I spent some minutes wandering around. Of course, all this could be taken as a positive, but it's a reminder that there's a downside to such a layout.
A lot of the map's combat consists of shooting and throwing bombs at eggs. Those with an OCD "forcing" them to go for that perfect kill count might find this exceedingly annoying (even if there are plenty of pipe bombs for the task), I just found it a rather irrelevant distraction and an oddity serving no clear purpose. Most of the combat takes place in two big open areas. The underground area has pillars behind which to hide, the outdoor area doesn't. Rather, it has a busy street section with moving cars. These were designed to kill you upon impact, which makes for some unique moments as you try to evade them in search for some atomic healths and whatnot, but at the same time it's rather annoying how you can't fly above them either (the map makes extensive use of the jetpack), as the "space" sections within the cars will insta-kill you. And this being a big open area with scant cover, odds are stacked against the combat being fun.

Conclusion: A one-of-a-kind 20-minute city map for sure (with less of a novelty factor after Salvage Title) that occasionally looks and feels refreshing and clever, but the size and layout of the map's two most prominent areas result in some bland looks and unfun combat. And what's with all the eggs... Still, props to MRCK for keeping it going with his recent creative spree, even if the results don't always satisfy everyone (how could they?). 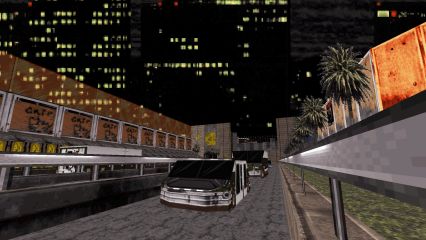 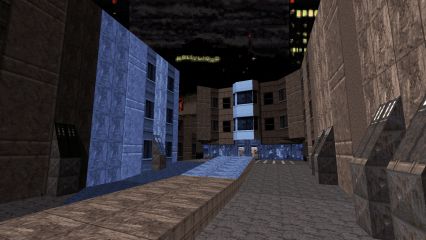