Description: This is a big one, a city map built around a movie theater (apparently a remake of the theater in E1L1 but it's quite different). DukePlus required and High Resolution Pack strongly recommended.

Design: The level essentially consists of two parts: the theater along with the street area that surrounds it and a part where Duke passes through a city that's been blown to pieces. The theater looks quite good thanks to well picked HRP textures but I did spot several locations that seemed awfully empty or poorly textured (such as the hallway separating the auditorium from the rest of the theater complex). Lighting is good all around with some well-placed lens flares. I really liked the streets near the theater where rain, palm trees, cars/spaceships and street lights come together. After the theater Duke finds himself in the middle of a torn-apart city. As he moves on the sense of destruction only intensifies, making you feel that you're actually getting closer to the source of all that mayhem.

Gameplay: This is one of those maps that don't have dead moments. It's true to its name, a non-stop slaughter fest. You get to face everything from Protozoid Slimers to a Cyclopean Emperor and plenty their DukePlus variations. There's just one problem with the DP enemies: you cannot distinguish between them and the originals. It becomes a problem when a seemingly normal Pig Cop comes up with a DP attack, making adaptation hard and causing some frustrating moments. Nevertheless, combat is fun most of the time and you are even given some good "dual pistol versus tons of liztroops" situations. Sometimes a Drone pack appears to help you in a difficult situation. I did have some bad moments in a section that takes places in an abandoned subway station. I was shooting Protector Drones with rockets while being pulled toward Octabrains (a DP ability) resulting in some rockets getting blown up right in front of my face. Also, visibility is pretty bad there, especially if you're plaing at day.

Conclusion: Be prepared to spend around thirty minutes with the map. The first time I played it there were moments when I expected the map to end but it just seemed to go on and on which wasn't a good thing. The second time I was better equipped to enjoy the level. The level is not without gameplay flaws, but it's a fun ride especially if you're well prepared. 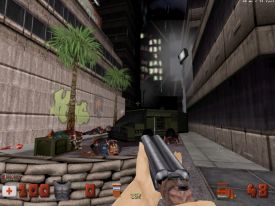 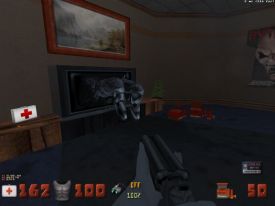