The review: A mapper knows that inspiration can come from strange places. This map (the first post-DNF map, btw) draws its inspiration from Pink Floyd's album/film The Wall. I'm familiar with neither so I'm probably not fully able to appreciate everything the map has. So, if you're a Pink Floyd fan feel free to add a couple of extra points to the score.
The map can be divided into four parts (while Eddy insists there are three). The first is a hospital with a medium-size city streets segment. Eddy's modest approach to lighting actually works pretty well here, giving the part a slightly stale look that, probably intentionally, fits the mood along with the part's background track. The second part is a school that reminded me of The Simpsons: Treehouse of Horror V, which I coincidentially happened to watch only an hour prior to playing this map. Of all the parts this one is the most interesting with its idyllic, sunny design that's combined with a "rotten from the inside" message. The third part is rather Kafkaesque in its grey, isolated, slightly threatening mood and is, design-wise, in stark contrast to the previous part. The fourth part has the player realizing the true nature of his situation, at least until the ending where your surroundings break down, this time literally.
To realize his vision, Eddy has included new material from textures to, most notably, music. It all fits and feels necessary even considering the usually surprising diversity of the original texture set. A map built on a musical story could fail if the music were too intrusive but that's not the case here. Throughout the map what you're hearing matches what you're seeing. There are new con tricks, nothing grand but they make the map feel modern, and some incredible cutscenes, most notably the ones that take place near the end although their length slightly lessens the map's replay value (I ran through the map twice). Of course, this being a Duke3D map not made by Bob Averill, there are monsters and they too fit in. After all, this is an "interactive rock opera", not a cutscene.

Conclusion: If Eddy wanted to do something new, he succeeded. A Pink Floyd fan ought to enjoy all the Pink Floyd elements, leaving the rest of us to enjoy the map's diversity and strangeness. It's a Duke3D map alright, but it's unlike any Duke3D map you've ever played. 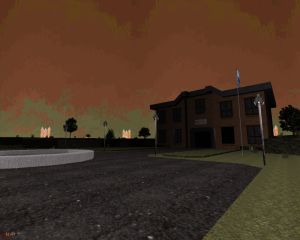 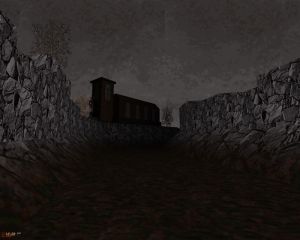