Description: The seventh level of Fernando's Lunar Apocalypse influenced "Orbital Oblivion" episode. Note: Contrary to what DNR reviews say about Fernando's maps, they were all designed within the past few years and not in 1996-1997. Fernando has a dishonest and childish habit of modifying file properties to give the impression that his maps were designed more than ten years ago.

Design: Terran Moonshaft is a slight step backward from Lunar Crossroads. Moonshaft borrows maybe slightly less from Lunar Apocalypse but can't seem to find any kind of a central theme - it's just a generic looking space station. Design is good but uninspiring. The level is mostly hi-tech but there are several cave sections that I found particularly well designed. Lighting is excellent as always in Fernando's maps.

Gameplay: Near the beginning you have to solve some puzzles involving carrying bombs via a conveyor belt. However, there's also a multi-button task which causes some confusions since at first it doesn't seem to open anything. I spent a good few minutes trying to figure this one out. After this the level is more straight forward but with a few nasty Drone ambushes, unfair explosion sequences and close quarter combat with Battlelords. Despite the modest enemy count the level is quite challenging, even frustrating to a point.

Conclusion: Terran Moonshaft is a relatively fun to play and well designed level but suffers from the same fate that ranks Lunar Apocalypse as the worst episode of the game: the map is too generic. 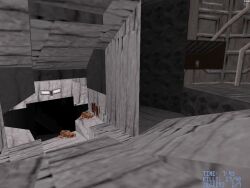 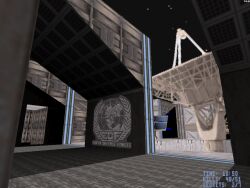