Description: Pretty big hi-tech level with three endings. Includes a new game.con file (not renamed) - Dunno what it does since it won't work with 1.5 - So don't try to use it with 1.4 or 1.5.

Design: Most of the level looks pretty good. Not very detailed but still above average. What gives the level its score are shadows. They're often used and they behave as they should. Sloped lightning effects are present and they look very good. Some locations looked pretty ok such as the place in the second picture below, the beginning with electrified water and the room with swastika.

Textures: Although textures were mostly well picked there definitely were textures which I'd have left out immediately. Some textures just didn't fit (such as that wood as a table texture with all those computers - Or some light textures) with the theme or gave locations a bit boring look.

Gameplay: Gameplay is a bit confusing but I have to say that I enjoyed playing this level since it's not too difficult and offers a different kind of challenge. You can choose between three endings - a helicopter, a Nukebutton or a boss fight. Gameplay is pretty unlinear. I played the level twice and during the second time the route was a bit different making the gameplay feel different as well. Monster/ammo balance is pretty well thought - Weapons are carefully placed around the level so you have to look for them in case you want to use other weapons than just pistol & shotgun (and you'll start the level without weapons).

Innovations: Nothing majorly original - However the level feels quite unique - Maybe mostly because of its gameplay.

Conclusion: Quite unlinear level where you decide how to finish it. Not the simpliest level out there but not most complex one either. 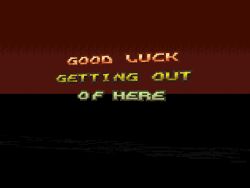 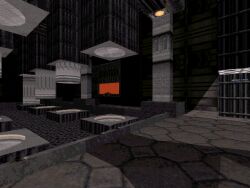