Description: A blast from the past you may say, EmericaSkater's first public release is a hi-tech map that, judging by its looks, could've been released in 2002/2003.

Into it: To be a bit more accurate, Depot has that perfect mix of excellent texturing & trimming, realistic (=hardly noticeable) lighting, plenty of details and some simple spritework (i.e., switches, computers etc.) that made levels from the aforementioned period work. The generally light brown/grey/white texture set reminded me of Alejandro's and Maarten Pinxten's maps as well as some of my own (the second map of Brave New World comes to mind). There's also some new art, mostly signs and trees which work better than what Duke has to offer (frozen palm trees!).

The map also plays very well, with a good item/monster ratio and some tougher foes thrown at you near the end. I did run into some lack-of-ammo problems during my first playthrough because I missed a Chaingun stash. Refreshingly you cannot rely on having shotgun shells on you throughout the map so you're forced to dispense destruction with other weapons as well. Several viewscreens are there to ensure that you don't get lost and generally the map is about finding keys and buttons. Nothing new but tons of fun, a feeling only enhanced by a fitting new ogg track.

Conclusion: Depot doesn't bring anything new to the table but it's a well-designed, 10-minute piece of entertainment with a flavor of 2002/2003. 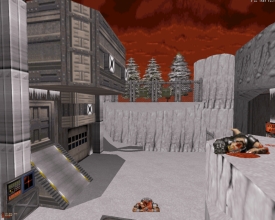 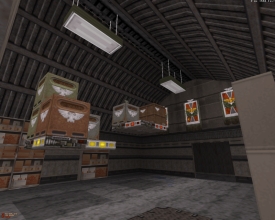