Description: Eddy just can't keep his hands off the keyboard which inevitably leads to new Duke3D maps. Sunshine Complex is a hi-tech map with a notable outdoor area. There are two versions of the map in the zip: one for vanilla Duke3D, one for DukePlus.

Design: The map utilizes the Russian LeBuild editor. Since I can't tell a Build trick from a LeBuild feature, there isn't much to comment on how the use of LeBuild is visible in the map. Anyways, as you'd expect from Eddy by now, architecture is good but it's also getting better. There is plenty of eye-popping spritework (see those chairs in the bar for example) and the outdoor area is impressive, bearing some resemblance to Gambini's Blown Fuses. The map looks good with the HRP but at least the DukePlus version is quite slow if played with the pack.

Gameplay: In both versions you get to do things other than just hunting keys and buttons. There are objects such as fuel canisters to pick up (and the compulsory fuses in the DP version) and a few good scripted sequences setting the mood. The DukePlus version was easily harder although the frames per second level I had to endure probably contributed to this. Dukebots make a visit in the DP version, just in the nick of time when thing seems to escalate a bit. Dead moments have been effectively removed with well placed monster spawns. 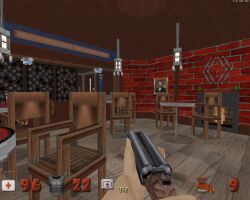 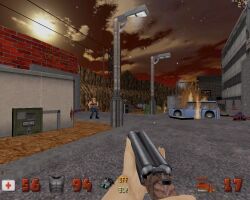