Description: Subsuelo is a hi-tech level set deep beneath the city of LA.

Design: Most of the level's design pleases the eye but I guess everything could have been trimmed a bit more. Most problems occur with texturing. Design offers enough variety - from cramped offices to larger hi-tech areas and city blocks.

Texturing: Some of the textures felt a bit off and especially most of the new sprites (mostly rock-band logos) were placed in places where you shouldn't find them. It's okay to give your sources of inspiration a royal treatment by placing them in Duke maps but do it properly.

Gameplay: The level flows quite well. You shouldn't get lost or run out of ammo. There's enough variety (city, underground, hi-tech, city) and a good number of enemies available. The only problem is the language which is Spanish (or some other Shakira-language) both during the level & in the txt. It's not really a problem but even I used (tried to use) English when I began mapping - I sucked but I learned by using it.

Conclusion: An enjoyable experience with above average design and a bit dull texturing. 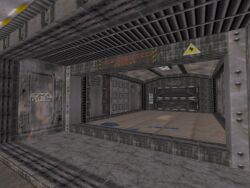 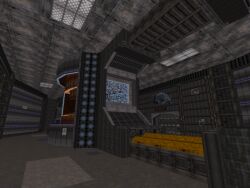