Note: Might work with Duke3D v1.3d if you leave the cons out.

Design: The level came as a surprise. The general architecture is brilliaint - well, okay, maybe not brilliant but it's very neat. There's isn't a single room that looks wrong, dull (although it IS a hospital) or unfinished. That said - there isn't anything spectacular either. But still - the rock formations outside look realistic (they're made of using numerous sectors and slopes), the overall lightning is good and the level actually looks like a hospital.

Texturing: Needle Time has a bunch of new textures. The general wall texture that decorates pretty much every indoor wall looks good - not too far from Duke's style and fits the theme. Then there are some cool posters spicing up the hospital theme. Trimwork is perfect and well used all around the level.

Gameplay: The hospital is about three stories high with plenty of action in each one of them. It might get a bit confusing - memorizing the locations of keys, locks and door signs but you'll get around it soon enough. There isn't that much of variety around but still enough to keep you interested. Maybe one outdoor area more would have done the trick (now there's just one in the beginning). 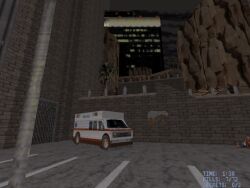 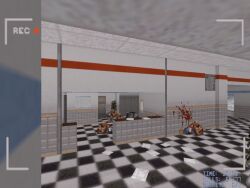