Description: A medium-size city map from the author of Skycity. The map consists of a short street area and a school.

Design: The map features a cool new effect - reflective windows, i.e., all windows in the map reflect the LA skyline. The effect is slightly overused and sometimes looks a bit buggy but overall it gives the level a nice touch. Another compliment concerning design is the huge amount of spritework the level utilizes to make the school have three stories although as a result of this lighting somewhat suffers. The school in general looks good with its classrooms and a school yard. The street area is classy with its clean buildings, reflective windows and trees.

Gameplay: Upon entering the school building you'll meet a Battlelord but with no rockets at your disposal you're going to have to avoid him (and his two respawn buddies) for a while. This concept actually works pretty well. Sometimes you end up in a classroom with a Battlelord waiting right outside the door but you can escape via windows. At one point you get your hands on an RPG and then it's showtime. The only thing I disliked about all this is that the Battlelords make a lot of noice. As for the rest, it's pretty basic stuff with a good item/monster ratio. Should take you no more than ten minutes.

Conclusion: Maybe not as big or as ambitious as Skycity but still a very good, refreshing map with good combat. 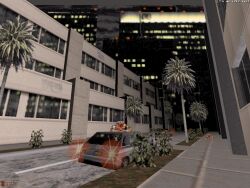 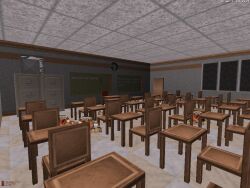